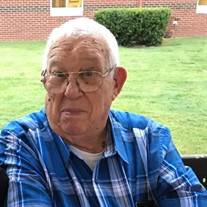 John Thomas Cole Sr. John “Johnny” Cole, age 90, passed away on June 2, 2022, in Collins, Mississippi. He was born on July 11, 1931, to Pete and Annie Cole. He married the love of his life, Elise Julienne Beaumont on February 13, 1955, of Baldwin, New York. John started his newspaper career working for Mr. Scarbrough at the Sun and finished his career working for Newsday on Long Island. After graduation from Georgetown High School, John and many of his boyhood friends enlisted in the Navy and he served on the U.S.S. Chauncey during the Korean War. He loved sharing his experiences on ship and everyone loved listening to him tell his stories. John was an active member of the Georgetown community, he was a volunteer fireman, coached fast pitch women’s softball and assisted at St. Helen Catholic Church. He is preceded in death by his wife, Elise Cole; his parents, Pete and Annie Cole; his sisters Maddie, Mabel and Jimmie Doris; his brothers, Vaughn Moody and Maurice Dean. John is survived by his daughter, Elise Cole Bannon; son, John T. Cole Jr and wife Kathy; granddaughter, Danielle Simpson; grandson, Michael Bannon and wife Brittney; great grandchildren, Grant W Simpson IV, Cole Thomas Simpson, Reese Bannon Simpson, Brittain Rose Bannon and Michael Thomas Bannon Jr; sister-in-law, Claire Sullivan and many nieces and nephews. Family and friends may call on Sunday, June 26, from 4–7 PM, at Lucas Funeral Home in Hurst, Texas. Celebration of Mass on Monday, June 27, at 10 AM, at St. Michael’s Catholic Church in Bedford, Texas. John will be laid to rest at the DFW National Cemetery in Dallas at 130PM. John was known by many names, but the dearest to his heart were – Daddy, Dad, Granddaddy and G-daddy. This wonderful soul will be missed by so many.

Send flowers to the Cole family.