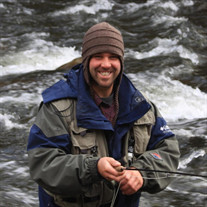 John Michael Bialek, age 38, of Highland Village, Texas, passed away on February 9th in his home, surrounded by family. He is survived by his son, Jackson Parker Bialek, his daughter, Annabelle Rose Bialek, his mother, Florence E. DeForest, his father and stepmother, William P. Bialek and Wendy Bialek, his brother, William Joseph Bialek & family, his sister, Tess Añia Marie Amri & family, and his stepsister Aleyna Moore & family. To watch the recorded service, please click here: https://youtu.be/8U8E7zKOCGs John is the younger (and he thought, better looking) of the two brothers. Although he was born in Fort Collins, Colorado and grew up in the Dallas, Texas area, he still managed to inherit from his father a rather unfortunate, and as it turns out - completely unfounded - allegiance to the Chicago Bears. As many young boys do, John participated in a variety of sports and hobbies on his way to graduating from Marcus High School. However, it was not until he attended Wyotech where he trained to become a mechanic, that his true passion was found. From that point on, John found success as a grease-covered, smiling diesel mechanic, and then later as a longhaired, pretty-boy boat mechanic. While his mother attributed this success to the extraordinary amount of time John spent playing with LEGOs as a child, it was really the genius he had for taking things apart and putting them back together (with nary an instruction manual to be found) that allowed him to so easily fix things. John also had a talent for making others laugh (sometimes at his own expense), an attribute punctuated with the sparkle in his eye, and the brightest and most playful grin you can imagine. Combine that magnetic personality with rugged good looks and his refusal to be anything but correct in any argument, and the result is a man who wake boarded without sunscreen, raced (and crashed) motorcycles, enjoyed combing through antique stores, treasured family history, and as his last big adventure, was as an award-winning Snap-On tool salesman. Eclipsing all of John’s personal achievements was his absolute love for his two children, Jack and Annie, who were the light of his life and his self-proclaimed reason for living, a fact no one dared deny. Over the last few years, Jack’s participation in youth baseball became a passion father and son shared together. From the start, John coached and Jack excelled. Their combined contribution to the sport evidenced by Jack’s enormous collection of pins, trophies, and medals hanging in his baseball-themed bedroom. They bonded over remote control cars and boats, admired tools, and ogled hot rods together, two peas in a pod. Annie, on the other hand, melted away John’s typical stubbornness to which all his friends and family could attest. Annie had him wrapped around that cute little finger of hers. She was, and will always be, his little princess. John made a place for himself in the heart of every person he met throughout his life. All who knew him will miss his smile, his laugh, and even his many headstrong moments. While the world is a bit dimmer without him, his memory will live on through his children, and the wonderful memories created at his side.

The family of John Michael Bialek created this Life Tributes page to make it easy to share your memories.

Send flowers to the Bialek family.