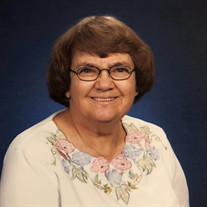 Remembering the Life Of Joan Carol Burzlaff Joan Burzlaff passed into the loving arms of her Savior on Tuesday, November 17, 2020 in Bedford, Texas, after a brief illness. Joan was born July 17, 1938, to Clara and Karl Krueger in Owatonna, Minnesota. She attended Owatonna High School where she graduated in 1956. She went on to attend Mankato State College, majoring in Chemistry and Biology, graduating with honors in July, 1959. She obtained her Teaching Certification in Ohio, and worked as a substitute High School science teacher for several years. In 1968, the family moved to Texas where she continued working as a Middle School Science teacher at Stripling Middle School in Fort Worth. She obtained her Master’s Degree in Education from Texas Christian University. She worked at Tarrant County College from 1976 as a Nursing Chemistry and Biology Instructor until she retired in 1996. She enjoyed volunteering tirelessly for the Fort Worth Botanic Garden and was awarded a lifetime membership as a Master Gardener. After her husband’s retirement, Joan continued volunteering with the Sudanese Refugee Ministry, helping teach English and other skills to refugee Sudanese women. During retirement, Bernie and Joan, enjoyed traveling to Europe to explore their German ancestry. Joan married Bernie Burzlaff in June, 1957, and together they celebrated over 60 years of marriage. The couple lived in Burleson, Texas for nearly 30 years before moving to North Richland Hills in 2003. Bernie and Joan were active members of St. Paul Lutheran Church in Fort Worth for 40 years, and transferred to Peace Lutheran Church in Hurst upon their move to North Richland Hills. They enjoyed leading various bible studies and participating in PALM (Peace Adult Life Ministry) group activities. She loved and served the Lord all her life, and was a teacher and mentor to many. Her joy above all was her grandchildren, and she loved to show pictures and talk about how amazing she thought they were. Joan was preceded in death by her husband. She is survived by her son, Mark Burzlaff and wife Amy; daughter, Laurie Anderson and husband Dale; and grandchildren, Allison Burzlaff, Michael Anderson, Elizabeth Anderson, and Jonathan Anderson and wife Angela. She is also survived by two brothers: John Krueger and wife Arlene, and Jim Krueger and wife Carole, as well as many nephews, nieces, other extended family, and friends.

Remembering the Life Of Joan Carol Burzlaff Joan Burzlaff passed into the loving arms of her Savior on Tuesday, November 17, 2020 in Bedford, Texas, after a brief illness. Joan was born July 17, 1938, to Clara and Karl Krueger in Owatonna,... View Obituary & Service Information

The family of Joan Carol Burzlaff created this Life Tributes page to make it easy to share your memories.

Send flowers to the Burzlaff family.