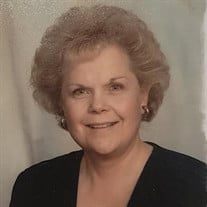 Jewel (Julie) Ilene Fanning, age 74, born April 4, 1947, in Waukegan, Illinois, and passed away Saturday, June 12, 2021. She was born to Helen June Farmer and Alfred George Heathcote. Julie graduated from Swedish American School of Nursing in 1968. She graduated in the top of her class and was very proud to be a nurse, she helped her family through medical questions and dilemmas over the years. On December 18, 1971 she married Gary Fanning. Together they raised two children and helped out with the stray “bonus children” that Jeff and Amy would bring home. She was an avid reader enjoying anything from murder mysteries to her favorite tabloid stories. She had a great love for piano and would often play just to calm herself as it was her happy place. She taught her children and grandchildren many songs over the years that will bring us all comfort going forward. If there were a sweet treat anywhere near her, she would be the first to call dibs on it. Her sweet tooth was enormous, and she kept many ice cream businesses open just from her visits. Most of all Julie loved her family. She absolutely adored her grandkids and great grandkids and would tell anyone who would listen all about them. She will be greatly missed. She is survived by her husband Gary Fanning of Fort Worth, Texas; sister, Kathleen Hedrick of Ocala, Fla.; son, Jeff Fanning and his wife, Peggy, of Spring Grove, Ill.; daughter, Amy Alward and her husband, Kurt, of Fort Worth, Texas; nine grandchildren, Justin Fanning (Reva), Rebecca Fanning, Ryan Lann Jr. (Samantha), Jacob Lann, Katelyn Lann, and their father Ryan Lann, Tracy Tanking (Joe), Todd Hacke (Justine), Braydn Alward, and Hailey Alward; four great grandchildren, Grayson, Emberlynne, Ezra and Eli and two more on the way in July and October. She was preceded in death by her mother, Helen Heathcote; father, Al Heathcote; older brother, Ed Heathcote of Winthrop Harbor Ill., and older sister, Dorothy (Dolly) Wynn of Murrieta, Calif. Memorial Service will be held at 2 pm, Monday, June 21, 2021 at Lucas Funeral Chapel, 1601 South Main Street, Keller, Texas 76248.

The family of Jewel "Julie" Ilene Fanning created this Life Tributes page to make it easy to share your memories.

Send flowers to the Fanning family.