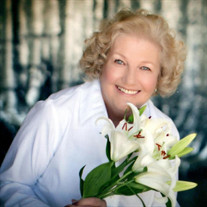 Jewel Angeline (Julie) Coalson, 74, born December 8, 1946, in Milwaukee, Wisconsin, passed away on August 6, 2021, in Fort Worth, Texas. Jewel Angeline Coalson was born in Milwaukee, Wisconsin, to Alvin C. Johnson and Julia May Johnson on December 8, 1946. She attended Boerne High School in Boerne, Texas and graduated as the Valedictorian of her class on May 28, 1965. She went on to attend The University of Mary Hardin Baylor. She was a National Merit Scholar. She was also a member of Mensa. After being accepted into the Federal Aviation Administration’s (FAA) Air Traffic Controller Academy, she graduated at the top of her class and was subsequently assigned to Fort Worth Regional Air Traffic Control Center. She went on to become a full journeyman. She changed careers and went to work for AT&T. She led a team of corporate sales and installation professionals. She was repeatedly recognized for her outstanding performance and was a member of The President’s Club 5 times. She earned multiple technology certifications, including being a Cisco Certified Internetwork Expert (CCIE). She retired after 24 years of service. Jewel treasured spending time with her 2 grandsons. She loved to travel domestically and internationally. She was a member of the 50 State Club. She was an avid reader. She was an active volunteer for her son and grandsons’ extracurricular activities. Jewel Angeline Coalson is survived by her husband of 54 years James Wyatt Coalson of Fort Worth, Texas, her son Russell Wade Coalson, her daughter in law Pamela Ann Coalson, her grandson Hunter Lee Coalson of Keller, Texas, her grandson Griffin Drake Coalson of Roanoke, Texas, her brother Timothy Johnson, her sister-in-law Marcel Johnson, her nieces Brandy and Candace Johnson of Seguin, Texas. She is preceded in death by her father Alvin C. Johnson, her mother Julia May Johnson, her brother Diamond Johnson, her brother Preston Moore, her sister Betty Ann Lynch and her sister Cheri Johnson. Family will receive friends from 6 pm to 8 pm, Thursday, August 12, 2021 at Lucas Funeral Home, 1601 South Main Street, Keller, Texas 76248. Funeral Service will be held at 2 pm, Friday, August 13, 2021 at Lucas Funeral Chapel. Click here to watch the recorded service.

The family of Jewel Angeline Coalson created this Life Tributes page to make it easy to share your memories.

Send flowers to the Coalson family.