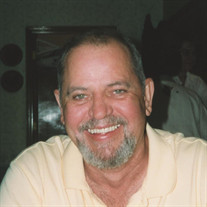 Jerry Moore, 67, of Hurst, TX, left this world for new adventures on April 7, 2022. Jerry was brought into this world on June 10, 1954, to Harold and Mary Allice Moore in Dallas, TX, the eldest of three brothers, Billy and Perry Moore. Jerry spent his youth as the protective older brother to his beloved younger brothers and was a rebel. He would often tell us stories about his adventures and escapades as a teenager. Jerry would meet his wife Jeanalou in 1979 over the phone while they were both working at All American TV Rental, and eight months later, they were married, choosing 02/14/1980, also known as Valentine's Day. She was his endgame. During their 42-year marriage, the only affair he ever had, was his lifelong love affair with Whataburger. Jerry and Jeanalou were ecstatic when they welcomed their only daughter, Joellen, on April 23, 1981. Jerry put his entire heart into being a husband and a father and loved his girls every moment. The blessings of his family brought him so much joy and happiness. Jerry's life was committed to helping others in every way he could. He had a long career as a caring and compassionate funeral director. Through his many acts of charity work, his uncanny knack for rescuing those in danger despite putting himself in harm's way, or simply making others smile as "Big Bubba- the Happy Hobo Clown"- Jerry's mission in life was to help others around him. A mission, he certainly succeeded...Jerry was a Veteran, a Master Mason, a Scottish Rite Mason, a member of Fort Worth Moslah Shrine Clown Unit, a York Rite Mason, and the El Texas Grotto, as well as an Odd Fellows and past president of Lions Club. Some of his best times in life were with the Moslah Shrine Clown Unit of Fort Worth when he was Big Bubba- the Happy Hobo Clown. In Jerry’s words, “The circus is where I could play as a child as a man. Making people laugh just by walking up, smiling, and putting your arm around them is wonderful. When I drive down the road in my clown outfit, the kids see me and start waving and hollering. I love that.” Throughout his life, Jerry very rarely complained. If you asked Jerry how he was, most of the time, he replied with, "If I were any better, I would be twins." He lived his life true to his alter ego, Big Bubba- the Happy Hobo Clown, which was to love everyone, enjoy every single minute, and never complain. A Texas Man through and through, Jerry loved the Dallas Cowboys, Texas sheet cake, and a Whataburger double-meat, double-cheese, with mayo on both sides of the bun, NO ONIONS. He was a Teller of Tales. We're at least 50% sure most of them were true. Jerry was a fierce protector and a reliable friend. He would be the first one in line to watch the newest Harry Potter, Marvel, and James Bond movies. He was the kind of person who drew people in with his genuine delight and sincerity. He will be forever in the hearts and immensely missed by anyone that was blessed to know him. He loved completely and deeply, and we take comfort in knowing that Jerry is now at peace and with God. In Jerry's words, "I've had a good life. I've lived, loved, stood out on the precipice, and not blinked. I'm a lucky man. The word of the Bible has been a blessing to me. I'm in God's Hands.“ Jerry is survived by his wife, Jeanalou, daughter, Joellen, brothers Billy and Perry, and numerous nieces and nephews. A celebration of his life will be held at Concordia Lutheran Church, 2503 Bedford Rd. Bedford, TX 76021 on Saturday, May 7 at 11:00 am. Interment will be held at Dallas-Fort Worth National Cemetery Dallas, TX on Monday, May 9 at 10:00 am. “I want a fun memorial. No sadness. I have lived through so many things and survived when I should have been gone. I will be watching.” – Jerry Loyd Moore In lieu of flowers, the family requests that donations be made to the ISCA Sneaker Fund, Temple #135, helping Shriners Hospitals for Children Burn and Osteogenesis Research. http://www.shrineclowns.com/info_pages/sneaker.asp

Jerry Moore, 67, of Hurst, TX, left this world for new adventures on April 7, 2022. Jerry was brought into this world on June 10, 1954, to Harold and Mary Allice Moore in Dallas, TX, the eldest of three brothers, Billy and Perry Moore. Jerry... View Obituary & Service Information

The family of Jerry Moore created this Life Tributes page to make it easy to share your memories.