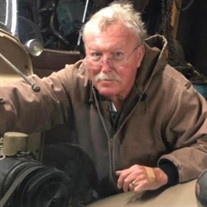 Jerry Lynn Farrier was born on January 10, 1947 in Woodward, Oklahoma to Jim & Verda Farrier. He was the 2nd in a family of four children. Jerry attended Wright Junior High School & Memorial High School in Tulsa. His family moved to Houston for his last year in high school. Jerry enrolled at the University of Houston night classes and worked at an antique auto parts store during the day. During his school days he developed a love of antique cars and later acquired a substantial collection of 34 Fords. In December, 1968 Jerry met his wife of 52 years, Debbie. Six months later they were married on June 14, 1969 at St. Michael’s church in Houston. After graduating in 1971, with a degree in economics & statistics he accepted a position in construction management with a Houston homebuilder. In 1975 the Farriers welcomed their first son, James and in 1978 Justin. Jerry loved being a Dad and cherished his boys. In 1983 Jerry was transferred to the DFW area to build homes in Arlington and Trophy Club. In 1984 the family purchased property in Southlake and built their home. In the ensuing years in Southlake, Jerry was elected for two terms on the city council with one term being Mayor Pro Tem. The family stayed active in the community and First Baptist Grapevine. Most importantly both sons accepted Christ as their savior and were baptized. In 1993 Jerry became an independent concrete contractor. Several years after his sons graduated from Texas Tech and Texas A&M , James & Justin took over the successful operation of the company. Jerry fought a long three-year battle with myelofibrosis and AML leukemia. He never complained and never lost faith in his Lord and Savior, Jesus Christ. Jerry is survived by his wife, Debbie; sons, James (Mary Sue), Justin (Tammi); brother, Jack (Linda) brother, Jon (Susan) , sister Carol Jean Ornes (Christian) and five grandchildren: Jarrett, Jenna, Jacob, Joe & Jett, as well as, nieces & nephews. Jerry passed peacefully into the arms of our Lord on Sunday, November 7, 2021. He was dearly loved. Visitation: Wednesday, November 10, 2021 at Lucas Funeral Home, 700 W. Wall Street, Grapevine from 5-7pm. Funeral Service: Thursday, November 11, 2021 at First Baptist Grapevine, 301 E. Texas St., Grapevine. Graveside services to follow at Grapevine Historical Cemetery. In lieu of flowers the family requests that you give to Samaritan's Purse at: https://www.samaritanspurse.org or to the charity of your choice.

The family of Jerry Lynn Farrier created this Life Tributes page to make it easy to share your memories.

Send flowers to the Farrier family.