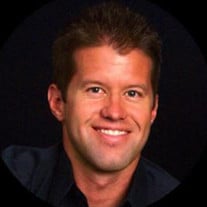 Jeremy Gray entered this world on May 18, 1981. Never was a child more wanted by his parents Dennis Gray and Dana Rodriguez. From the moment he was born, he has been the light of his mother’s life. He was every parents dream of a son. Jeremy grew up in Borger, Texas where he attended school. He graduated in 1999 and continued his education and college graduation from West Texas A&M University in Canyon, Texas. It was there that he met the love of his life and his soul mate, Andrea…. Annie as he called her. She was his gift from God and he knew it. After graduation from college and a move to Dallas, it was there that he and Andrea married and began their lives together. In 2008, Jeremy and Annie welcomed Drew – the son that would make them a family of 3. A parents dream of a son. As their lives continued to grow they were blessed to have Keilyn enter their lives in 2014 – the precious daughter to make their family complete. Jeremy began his career after college graduation in the oil and gas industry. He currently worked for Halliburton as a Business Development Manager. If you knew Jeremy – there wasn’t anything he couldn’t do. If he spoke – you better believe he knew the answer. There was a period in his life before he began his current position that he had been laid-off. Instead of laying around and collecting unemployment – he started a business redoing furniture and Shades of Gray was born. It was a way to make money to take care of his family and another way to spend time with Annie. Something they did together. They were a team in every way. Anyone who knows Jeremy knew that when he was interested in something, he was all in: including boating, golfing, sporting clays, a good bourbon, Texas country music, working out at the gym (we nicknamed him “muscles”), avid tennis fan, indoor soccer, cooking the best brisket in town, planning special trips and outings for his family and friends and always going all out to make sure everyone had the best time! He was full of life and laughter, and always had a joke or a funny story to tell. Jeremy had it all – the beautiful wife who not only loved him...but was his best friend, the son, the daughter, the family that adored him, the house in the burbs, the career that he loved and the beautiful smile to wrap all that up. He was in an incredible place in his life and the loss we are feeling is beyond words. He was an incredible husband, father, son, brother, nephew and friend. If Jeremy did it – it was done right and there was a checklist to make sure he was correct. All he had to do was smile and raise his eyebrows and he captured your heart. Jeremy left this world in the blink of an eye on August 10, 2021 at the age of 40. Jeremy was preceded in death by his grandparents Terry and Julie Gray, grandfather Phillip Allen. He is survived by his wife and best friend, Andrea, his son Drew, his daughter Keilyn, his mother, Dana Rodriguez of Borger, his father Dennis Gray of New Mexico, his parents-in-love, Bob and Karen Jameson of San Antonio, his sister Connie Rodriguez of Borger, Texas, his brother Christian Rodriguez of Amarillo, Texas and his brother Dustin Gray of Borger, Texas, grandparents Royce and Phyllis Shelton of Amarillo, Texas. He is also survived by numerous uncles, aunts, cousins, and a host of close friends. Family will receive friends from 6 pm - 8 pm, Saturday, August 14, 2021 at Lucas Funeral Home, 1601 South Main Street, Keller, Texas 76248. Funeral Service will be held at 10 am, Sunday, August 15, 2021 at Lucas Funeral Home Click here to watch the Recorded Service.

Jeremy Gray entered this world on May 18, 1981. Never was a child more wanted by his parents Dennis Gray and Dana Rodriguez. From the moment he was born, he has been the light of his mother&#8217;s life. He was every parents dream of a son.... View Obituary & Service Information

The family of Jeremy Gray created this Life Tributes page to make it easy to share your memories.

Send flowers to the Gray family.