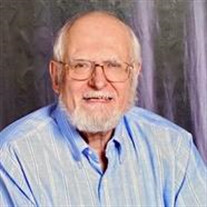 Jay was born in Philadelphia, Pennsylvania on September 16, 1932, later moving to Savannah, Georgia when he was a young boy. He found his love for the ocean at Tybee Beach before Joining the Navy and serving on the USS Alstede. He loved attending his navy reunions with his wife Irene where they built long lasting friendships with his old shipmates. After the Navy, Jay attended Wood Jr. College in Mississippi where he met his first wife and mother of his children, Patsy Logan Gilpin. They were married for 31 years until her passing in 1987. Later he married Irene Henderson Gilpin who was a dear friend of the family. Irene helped the family care for Patsy during a long illness. Jay and Irene’s friendship blossomed into love and they were married for 34 years. Jay was very fond of saying, “I have loved and been loved by two beautiful women for almost 70 years! You cannot get any luckier than that.” After Wood Junior College, Jay earned his Doctor of Veterinary Medicine from the University of Georgia. Jay loved being a veterinarian and the different roles afforded him. He was especially proud of serving as the Area Supervisor for Mississippi and Tennessee during his tenure with the Department of Agriculture as well as running a free rabies clinic in Memphis. Jay and Patsy were founding members of William C. Martin United Methodist Church in Bedford, Texas where he and Irene continued to worship. Jay also did his share of political door knocking and encouraged others to vote while serving as precinct chair. Jay loved to dance, fish, play games and always had a smile on his face. He was a diehard Georgia Bulldog supporter and Dr. Who fan. Jay was very conscious of the environment and made a point to pick up recycling during walks he enjoyed with Irene and their beloved pets. The city of Euless recognized Jay for his recycling and beautification of the city. Jay was predeceased by his father Jason Gilpin, Mother Ida Gilpin, and sister Lilian Morgan. Dr. J.W. Gilpin is survived by his wife Irene Gilpin, daughter Susan Gilpin, son Jay Gilpin, Jr., and his wife Damarys, stepsons Ed Henderson and his wife Margaret, and Greg Henderson. Grandchildren Tricia Gilpin, Kevin O’Dell, Lilah Gilpin, Randi Woods and her husband Chad, Rebecca Robinson and her husband Brady, Travis Henderson, Selena Warner and her husband Joe, Joshua Gutiérrez and his wife Shaundra, and many Great grandchildren, nieces, and nephews. Whether he was called Dad, Doc, Grandpa, Daddy, Uncle, Sweetheart, Budd or Dr. Gilpin, Jay was loved by many and we believe the Master is saying “Well Done, good and faithful servant, Enter thou unto the joy of the Lord. Matthew 25 :23 A memorial service for Jay will be at Martin United Methodist Church in Bedford Texas at 1:00 PM on March 19, 2022. If desired, memorial donations can be made in Jay’s honor and memory to Martin United Methodist Church in Bedford.

Jay was born in Philadelphia, Pennsylvania on September 16, 1932, later moving to Savannah, Georgia when he was a young boy. He found his love for the ocean at Tybee Beach before Joining the Navy and serving on the USS Alstede. He loved attending... View Obituary & Service Information

The family of Jay Willard Gilpin, DVM created this Life Tributes page to make it easy to share your memories.