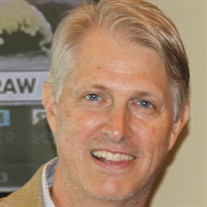 Jason Nichols Thomas passed away on March 13, 2022 at his home in Keller, Texas at the age of 54. In July 2020 he was diagnosed with bile duct cancer and battled it till the end. Jason was a true and faithful servant of the Lord. Since his diagnosis, he spent every day strengthening his faith, being grateful and thanking God for all the blessings in his life. Jason was born in Dallas on December 21, 1967 to Janice and Gerald Thomas. He lived in Sulphur Springs, TX and Texarkana, AR. After graduating from Arkansas High School in 1986, Jason attended Southern Methodist University to play football. He received his B.A. in Economics in 1990. Jason obtained his law degree from SMU Dedman School of Law in 1994. He was an Associate Editor of SMU Law Review. After passing the bar, Jason’s first job was at Touchstone Bernays LLP in Dallas, where he worked for 9 years and became Partner in 2002. In 2003, Jason co-founded Carnahan Thomas LLP and continued his insurance defense practice in Southlake. In 2017, Jason opened the J. Thomas Law Firm and started practicing personal injury. Jason really enjoyed helping his clients. Jason was elected to the American Board of Trial Advocates. He was selected a “Texas Super Lawyer”, was on the list of Top Attorneys according to Fort Worth Magazine and received the Trial Gladiator Award in recognition of his outstanding trial results. Jason was a member of the Dallas and Tarrant County Bar Associations. Jason was a member of SMU Lettermen’s Association and Mustang Club and was a football season ticket holder for years. While he enjoyed 28 years practicing law, it was his family who took front and center stage. For over 33 years Jason loved his wife, from the moment they met at SMU. They were best friends and married in 1999, and what followed was a wonderful life blessed by 3 beautiful children. He loved his kids and was so proud of how amazing they were turning out as young people. Jason believed in them 100% and was so excited to see what the future had in store for them. He enjoyed family vacations…going to Lake Tahoe in the summertime, Cabo San Lucas over spring break, California and East Texas to see family, and wherever baseball tournaments in the summer took them. As long as he was with his family, life was good! Jason was a devoted son who admired and loved his parents. He was a loving brother and was very proud of his sister. Jason was a good friend and had a great group of friends from every aspect of his life. So many good times! He was a Commissioner at Keller Youth Association and a member of White’s Chapel UMC. Jason is survived by his wife, Michelle Vukasin Thomas, their 3 children, Pryor Nichols, Clayton Reed and Charlotte Lillian, his father Gerald Thomas, his sister and her husband, Gae and Matt Campbell and their children and spouses, Sarah and Caleb DeLee (daughter Lilah) and John and Megan Campbell (daughter Vivian), his mother-in-law, Sonja Vukasin, sisters and brother-in-laws, Kristina Brouhard (children John, Natalie, Samantha), George and Beshka Vukasin (children Ellis, George). Jason is preceded in death by his mother, Janice Nichols Thomas and his grandparents, Floyd and Willa Mae Nichols and Reed and Belle Thomas. Jason wanted to thank the doctors and nurses who treated his cancer, particularly those at MD Anderson Cancer Center for their honesty and humanity! In lieu of flowers, please consider contributions to MD Anderson or a charity of your choice. A Celebration of Life will be April 1, 11 am at White’s Chapel UMC in Southlake.

Jason Nichols Thomas passed away on March 13, 2022 at his home in Keller, Texas at the age of 54. In July 2020 he was diagnosed with bile duct cancer and battled it till the end. Jason was a true and faithful servant of the Lord. Since his diagnosis,... View Obituary & Service Information

The family of Jason Nichols Thomas created this Life Tributes page to make it easy to share your memories.

Send flowers to the Thomas family.