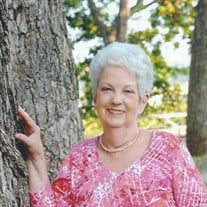 Janet King Bonner died at home in Southlake, Texas on June 23, 2021. Alzheimer’s is insidious. She requested cremation and no services. Janet is survived by Michael Edd Bonner; Carlajo, Christopher, & Jessica Oehrlein; Edd, Deborah, & Michael Bonner. The family is grateful for the excellent care provided by Keri Gilbert and “Above and Beyond Compassionate Care.” Janet King Bonner, only child of Carleton & Jewell Freeman King, was born in Tyler, Texas on 3 September 1943. Her birthday was a couple of weeks before her parents’ 17th wedding anniversary. She grew up on a farm in the Starrville community of Smith Co., Texas. Janet attended Winona schools and graduated as Salutatorian in 1961. Learning to play the piano early, she also took organ lessons. For many years, she and her mother provided the music at First United Methodist Church in Winona. Janet’s upbringing as “a child who should be seen and not heard” helped make her shy. She never said much in large groups but enjoyed being with friends and in small groups. As a very private person, she was very selective with her confidences and felt that personal things “were nobody’s business.” A stubborn streak insured that telling her that she had to do something resulted in her definitely not doing that. She received her driver’s license when she was 14, and became the driver for her family; in sixty-plus years of driving, she never had a traffic ticket. After graduation from Winona High School, Janet attended Tyler Junior College where she was a member of the Singing Apaches. Upon receiving her AA Degree from TJC, she enrolled in Stephen F. Austin State College in Nacogdoches. While a freshman at SFA, Mike was attracted to the young lady playing the piano at The Wesley Foundation. That young lady was Janet King. Janet received the BS Degree from SFA in 1965, moved to Tyler, and taught math at Boulter Junior High. By that time, she and Mike were engaged. According to a stranger who yelled at them out of the window of a passing car on a Tyler street, Mike “didn’t deserve a girl that good looking.” Mike couldn’t have agreed more. They were married in Tyler in 1967. After 2 years teaching, Janet had a job, a brand new car debt free, and $1000 in the bank; Mike had a degree. After attending SFA during the summer sessions, Janet was awarded the M.Ed. Degree in 1967. Janet spent the 1967-1969 school years teaching math at Irving High School in Irving, Texas. In 1969, she and Mike moved to Austin. They returned to Tyler in 1970, where Janet concentrated on raising Carlajo and Edd and in caring for her widowed mother. In addition to the usual household duties, she sewed clothes for herself and the children. Janet enjoyed crafts like macrame, tole painting, knitting and crocheting. After learning needlepoint and cross-stitch, she spent countless enjoyable hours completing needlepoint and cross-stitch projects. A five-panel cross-stitch Nativity is the centerpiece of her collection of over 200 nativity sets from all over the world. As an active member of The Order of the Eastern Star, she served as Worthy Matron and held several grand appointments. She also found time to enroll in computer science classes at UT Tyler. In 1984, she began teaching math and computer science at John Tyler High School. After both children graduated high school, Janet and Mike moved to Flower Mound, Texas for jobs in Lewisville Independent School District. After a year, Janet trained as a travel agent and became certified as a Master Cruise Counselor. When Mike retired in 1996, she quit her job. They kept one foot in the road for quite a while visiting all 50 states, 120 countries, and all 7 continents. Some travels were aboard cruise ships while others were land tours; private tours were interspersed with a few group tours. They preferred traveling in “a group of two.” Several trips to enjoy the European Christmas Markets provided festive ideas. When cruising the Nile in Egypt, they enjoyed private tours with an Egyptologist. Touring Tanzania with private guides and vehicles provided insight into African wildlife as did seeing “the Big Five” in Mala Mala, South Africa. Climbing around the ruins of Machu Picchu and Easter Island’s Moai was challenging but worth the effort. Seeing the Taj Mahal by both sunrise and sunset was an unforgettable experience. In 2012, they used accumulated miles on Lufthansa Airlines to fly Around the World free and visited Turkey, Japan, and Bali, enjoying private tours in each country. Another summer they spent 3 weeks in a flat in Interlaken, Switzerland and another week in hotels. Their 50th Wedding Anniversary was spent at the “Four Seasons” in Chiang Mai, Thailand. A thirty-five day circumnavigation of Australia in 2018-2019 was their last big trip. When asked which trip was her favorite, Janet usually replied, “The one I’m on.” or “The next one.” Neither she nor Mike regretted money spent on travel; their mantra was “Travel While You Can.”

The family of Janet King Bonner created this Life Tributes page to make it easy to share your memories.

Send flowers to the Bonner family.