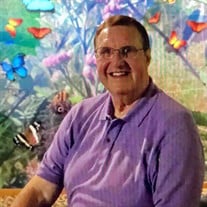 Dr. James Edward Stevens, age 73, born July 9, 1948 in Talullah Louisiana and passed away September 30, 2021 in Grapevine Texas. He was born to Donald Kenneth and M. Jean Stevens. He served his time in the United States Marine Corps. He proudly attended college with a full scholarship to play football at Abilene Christian College and in his later years was drafted by the Dallas Cowboys in 1971. Instead of pursuing a professional football career, he chose to answer a lifelong calling as an Emergency Room Physician and Critical Care Medicine Specialist. He graduated from Eastern Hills High School, attended Abilene Christian College, University of North Texas and Texas College of Osteopathic Medicine Jacksonville General for Emergency Room Residency and Tulane University for Anesthesiology & Critical Care Medicine Residency He was a man of many avocations, all of which he was a master at. He loved boating, football, baseball, going to the movies, good food, and beautiful beach views. He specifically adored flying in all its many aspects. From the copious amounts of complicated instruments inside the cockpit to the smooth landing of an aircraft, he loved it. Even when he himself was no longer a pilot, he still found small joys in it as a spectator. Always, without fail, he sat at the window seat on commercial flights, looking outside the window with his children or wife, and enlightening them with facts about the plane’s wings or local terrain that was seen. He was a zealot for learning. He loved listening to audio books, reading articles, attending medical seminars, helping his kids with algebra (whilst learning new concepts begrudgingly along the way), and finding overly long and complicated words to implement into his vernacular. There was never a point in his life where he was content with the knowledge he possessed; he ALWAYS had a desire to learn something new. He was a beloved son, nephew, husband, and greatly loved father who always prioritized time with his family over any professional endeavors. His love for his wife shone in every one of his decisions. From being a man who wanted no children to a father of seven, that speaks not only for the adoration that he held for his wife, but also revealed how big of a heart he had. The multitude of memories gained through travels and life experiences spent with family and friends are too innumerable to count. He valued every patient he treated – oftentimes spending well over the standard treatment time to ensure that all their questions and concerns were answered and addressed. He went over and beyond for everyone, no matter if he was in pain or tired. The wisdoms of life that he endowed upon others were abundant. He would chronicle the most interesting stories or procedures that happened during his time in the hospital, not leaving a single detail out, while those who were fortunate enough to hear these stories from him, listened intently. He found great purpose in helping others and worked ardently until he couldn’t anymore. The genuine relationships cultivated with friends and patients throughout this time brought him great joy- especially in the last few years of his life. He was truly a one of a kind. The knowledge gained and guidance that he shared will forever be priceless. John 16:22 “So with you: Now is your time of grief, but I will see you again and you will rejoice, and no one will take away your joy.” He is preceded in death by his parents, M. Jean and Donald Kenneth Stevens; step-mother, Ruth Stevens; grandmother, Agnes Bertha Shauberger; grandfather, Mial Jennings Shauberger and uncle, Howard Louis Burchardt. Survived by his loving wife, Patricia Stevens; son, James Matthew Stevens; daughter, Staci Michele Stevens; son, James Taylor Stevens; son, James Christopher Stevens; daughter, Lindsay Jean Louise Stevens; son, James Ryan Stevens; daughter, Jennifer Paige Stevens; daughter-in-law, Jessica Stevens; grand-daughter, Adalynn Claire Stevens; grand-son, Andrew Carter Stevens; beloved aunt, Sissy Burchardt; cousins, Susan and Gregory Graves; cousins, Sally Turner and Mial Shauberger; and many more greatly loved nieces and nephews. Memorial Service will be held at 2 pm, Saturday, October 9, 2021 at Lucas Funeral Chapel, 1601 South Main Street, Keller, Texas 76248. Guest may gather at 1:30 pm prior to the memorial service commencing at 2 pm. Click here to watch the LIVE STREAM In lieu of flowers, our family would appreciate donations to our younger sister's educational savings fund, which donations may be made at the following Venmo Account (@stevenscollegefund2021 / 4 Digit Verification - 4345). Donations by check may be mailed to 401 N Carroll Avenue, Mailbox #136, Southlake, TX 76092. Any amount is deeply appreciated during this difficult time for our family. Thank you for your love and support.

Dr. James Edward Stevens, age 73, born July 9, 1948 in Talullah Louisiana and passed away September 30, 2021 in Grapevine Texas. He was born to Donald Kenneth and M. Jean Stevens. He served his time in the United States Marine Corps. He... View Obituary & Service Information

Send flowers to the Stevens family.