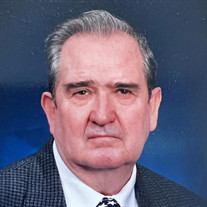 Click here to watch the Recorded Service. James Lothell Rogers, born December 7, 1932 in Bluff Dale, Texas, to James Thomas Rogers and Loree Like Rogers, passed away December 28, 2021 at his home in Colleyville, Texas, at the age of 89. He lived a full life of service. Jim entered the Air Force at 22 years of age on April 1, 1954, starting a career of decorated military service and ending his career as a lieutenant colonel. As a boy growing up on a Texas farm, Jim hoped to travel around the world, he was able to accomplish that dream. On three separate occasions, Rogers was part of a five-day trip that took him literally around the world, starting and ending in Charleston. He met his wife, Guyrene, while stationed in Harlingen where he was an instructor at Harlingen Air Force Base. They were married in 1955. In his career Jim received a multitude of accolades. He was awarded the Distinguished Flying Cross, Meritorious Service Medal, Air Medal, National Defense Service Medal and Republic of Vietnam Campaign Medal, to list a few. After 20 years of service in the Air Force, Rogers retired and returned to civilian life. In this new chapter of life, he would do a multitude of jobs, including auto collision repair, trailer construction and computer operations for SMU. He enjoyed watching the Texas Rangers, following them intently. Jim had a love for woodworking and building things. He had such a passion and love for clocks. Jim built a grandfather clock with each son both have in their homes today to cherish. From his travels, Rogers collected many grandfather clocks over the years. After his wife, Guyrene, of 39 years passed away, James married Shirley Yvonne Adkins, whom he was married to when he passed. He lived a long and blessed life. He was proceeded in death by: wife, Guyrene Robinson Rogers, sister Joyce Halbert, and his sister Calestine Smith. He is survived by: wife Shirley Adkins Rogers, sister Barbara Kirkland, daughter Deborah Yarbrough, son James (Cheryl) Rogers, and son Harvey (Darlene) Rogers, grandchildren Kristina (Tim) Whitley, Tricia (Tyler) Smith, Brandon Rotthaus, Christine Rogers, Emily Rogers, Lauren Yarbrough, and Justin Yarbrough, great grandchildren: Lexy, Conner, Kaylee, Elijah, and Olivia.

The family of James Lothell Rogers created this Life Tributes page to make it easy to share your memories.

Send flowers to the Rogers family.