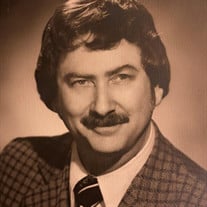 James Kenneth (Jim) Richhart was born to Lucille and C. L. Richhart on January 9, 1933 in Fort Worth, TX. He left this life and entered Christ’s presence on June 8, 2021 at the age of 88. Jim’s early years were spent in Fort Worth, graduating from Paschal High School in 1951. Soon after beginning college classes, Jim married his high school sweetheart, Bettye Anderson in 1953, and that same year was inducted into the U. S. Army. After finishing his California military assignment, he returned home to complete his B.S. in Business Administration at Texas Wesleyan in 1957. After several years of traveling as a business consultant, Jim and Bettye returned home and he enjoyed the rest of his career in the restaurant business, owning and operating several, and then joining Pancho’s Mexican Buffet in 1970, retiring after 27 years in 1997 as Vice President of Purchasing and Distribution. After retiring, Pancho’s asked him to continue serving as a consultant through 2005. Jim and Bettye were married for 55 years. They shared a strong Christian faith, inherited from their parents, and passed on to their sons. They also shared a mutual love of travel and visited most of the U.S., Canada, Mexico, the Caribbean, Central and South America, Europe, and the Middle East. Bettye passed away in February of 2009. “Doubly blessed” is how Jim later described his life after the loss of his first wife, and his marriage to Bobbie Huff, Bettye’s long-time friend and widow of his best friend, Louie Huff. The two were married in November of 2010. Bobbie joined Jim in his travel pursuits, and they began married life with a cruise and private tour of Rome. Several other adventures followed until health and physical limitations kept them closer to home, enjoying family and friends. Jim was preceded in death by his first wife Bettye, his father and mother, C.L. and Lucille Richhart, his brother Karl Richhart, his nephew Barry Richhart, and sister-in-law Gerri Cook. Jim is survived by his wife, Bobbie; two sons, Michael (Stephen) of North Richland Hills and Cliff (Sarah) of Argyle, granddaughter Darby (Tyler) and grandson Grayson, sister-in-law Judy, nephews Bryan and Charles, niece Cindy, and Bobbie’s children, grandchildren, and great-grandchildren. Funeral arrangements by Lucas Funeral Home with internment at Oakwood Cemetery in Fort Worth.

The family of James Kenneth (Jim) Richhart created this Life Tributes page to make it easy to share your memories.

Send flowers to the Richhart family.