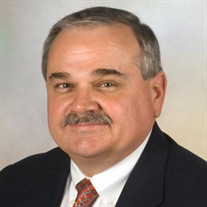 Our adored husband, father and grandfather, James Lee Braswell, Jr. left the arms of his family and entered the gates of Heaven on Monday, February 8, 2021 at a local hospital. James was born November 17, 1949 to James and Eudora Braswell in Stephenville, Tx. He spent most of his childhood in Gainesville, Texas where his father was a pastor to Tabernacle Baptist Church. He graduated from Gainesville High School in 1968 and then attended the University of Texas at Arlington where he studied Mechanical Engineering. After graduation in 1973 with a BSME, he went on to obtain higher education and earned a Masters in Mechanical Engineering from UTA. He then attended Texas A&M University and earned a Masters of Interdisciplinary Engineering. He is preceded in death by his parents, James and Eudora and brother, David Braswell. He is survived by his wife, Becky, his son James Lee Braswell, III and wife Nikki Braswell, grandchildren Victoria Grace and Jackson Lee Braswell, his daughter, Laurie Rebecca Taylor and husband Lt Col Scott Taylor, grandchildren Logan Alan, Grayson James and Mallory Brooke Taylor, his son Brandon Aaron Braswell and wife, Dr. Juli Braswell and his granddaughter, Emery Leigh, who is expected to arrive in May. He is also survived by his brother Jonathan Braswell and wife Judy, and sister Becky Davis and husband Royce Davis, and a host of nieces and nephews. He married his college sweetheart, Becky Moore, in 1973 in Dallas, Texas. They have lived in Colleyville, Texas for the past 30 years. James was employed by Bell Helicopter Textron for 45 years. He served in various roles throughout his career as an Engineer and mentor in Research and Design, Chief of Rotor Systems Design and Technical Fellow for Bell Helicopter, and served on the University of Texas at Arlington Engineering Board of Directors. Subsequent to his retirement, he created his own consulting company, Ja-Beck Solutions. James has served as Deacon and Elder for Newchurch Christian Fellowship and currently served as Deacon for Gateway Church. His generous heart loved so well his family, friends, friends of family and those in need. This disciple of Christ and gentle giant will be missed by so many. He imparted Christ-like traits to all those that knew him well. Family visitation will be at Lucas Funeral Home, 700 W. Wall Street, Grapevine, Texas from 6pm to 8pm on Friday, February 19. A celebration funeral will be on Saturday, February 20 at 10am at Gateway Church, 7501 Davis Blvd, North Richland Hills, Texas. James would ask that each of you look to God for guidance and give big hugs to your family and friends often as he did. Life is short. Cherish the moments you have and use them well. The family requests your choice of either flowers for his service or charitable donations be made in his memory to any of the following: • Mission Barnabas at: Missionbarnabus.us/donate or PO Box 820734, North Richland Hills, TX 76182 • Heart for The Nations, PO Box 1861, Keller, TX 76244 • Life Outreach International, Lifetoday.org or PO Box 982000, Ft. Worth, TX 76182-8000

Our adored husband, father and grandfather, James Lee Braswell, Jr. left the arms of his family and entered the gates of Heaven on Monday, February 8, 2021 at a local hospital. James was born November 17, 1949 to James and Eudora Braswell in... View Obituary & Service Information

The family of James Lee Braswell created this Life Tributes page to make it easy to share your memories.

Send flowers to the Braswell family.