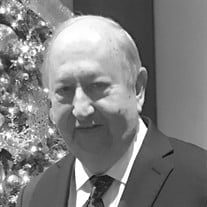 James Arthur Anderson, loving husband, father, doting Papa and big brother left this earth on his final flight Wednesday December 2, 2020. James was born on July 8, 1940 in McGregor, TX to James Winston Anderson and Helen Louise Walter Anderson. He was the oldest of 4 children. After graduating high school in Waco, TX he enlisted in the U.S. Army, spending 6 years based in Europe and in Washington, D.C. He earned his BA in Business Administration from the University of Maryland in 1967. He began his business career in the insurance world in 1969 at Allstate Insurance Company, working his way through their management training program. He left Allstate and moved into the re-insurance world, working for various companies as Controller. He retired in 2008 from American Underwriting Managers in Southlake, TX. He started his next and most loved career as Chief Papa to his 3 wonderful grandsons - David Jr., Kody and Nash. Jim became heavily involved with his son Stephen’s love of soccer from the time he was 4 years old. He started coaching his soccer team until he moved into the competitive soccer world. Jim then volunteered his time year-round with The Dallas Cup, an international soccer organization that brought teams from all over the world to Dallas for a soccer tournament every year during Easter week. Jim was on the Board of Directors for many years as controller. He made many friends around the world – Sweden, Denmark, Germany, England and Brazil – during this time. He made a trip to Sweden and Denmark to visit friends and attend their soccer tournaments during the summer of 1989. While there Jim was able to help his Uncle Jack with their Swedish ancestry research, visiting some of the local cemeteries to gather historical data on their relatives. Jim and Stephen were also able to make another trip so he could attend a Swedish soccer camp. Jim’s love for soccer also influenced his daughter Jennifer as she too became involved in high school soccer as team manager for the girls soccer team at Trinity High School in Euless, TX. Jim has always been extremely proud of his children, watching them grow and mature throughout the years. Stephen worked with his dad for several years before starting his career in the IT world. He was Jennifer’s biggest cheerleader for continuing her education while working and raising 2 boys, earning her paralegal degree. In addition to his grandsons, Jim enjoyed the outdoors - whether it was trying to raise tomatoes, various woodworking projects or creating beautiful landscapes with the change of seasons. He also loved feeding the various birds and wildlife that dared to venture into the cat protected back yard. He would put out peanuts in the shells, calling all blue jays to come and get it before the squirrels snatched them to hide for the future. Jim was also a volunteer at Texas Health Resource-HEB at the Cardiac Rehab center several days a week. There he made many wonderful friendships with staff and volunteers. He earned the title ‘Swiffer Man’ from the volunteers that he dearly loved working with. He gave freely of his time to his Mother-in-Law, Dorothy Crump taking her to get flowers for her garden, grocery store and almost always ended their excursions at McDonalds where they shared a #2 Cheeseburger Meal with an extra water and an “occasional” ice cream cone. Holidays and family reunions and just being around his family, brothers, sister, cousins, nieces and nephews, always brought him great joy. We will hold those memories close to our hearts forever. Jim was preceded in death by his father, James Winston Anderson and his mother, Helen Louise Walter Anderson. Jim is survived by his loving wife, Cynthia Anderson of Bedford, married 39.5 years; son Stephen James Anderson, his wife Brandi and son Nash Wylie Anderson of Dallas; daughter Jennifer Renee Collins Cannon and sons David Paul Cannon, Jr and Kody Lane Cannon of Bedford; brothers Eddie L. Anderson and wife Kathy of Waco, TX and David W. Anderson and wife Ann of Waco, Tx; sister Margaret Helen Kramer of Lorena, TX as well as numerous cousins, nieces, nephews and friends. A memorial service will be held in Colleyville, Texas at a later date. In lieu of flowers, memorials may be made to The American Diabetes Association, the American Heart Association or the charity of your choice.

The family of James Arthur Anderson created this Life Tributes page to make it easy to share your memories.

Send flowers to the Anderson family.