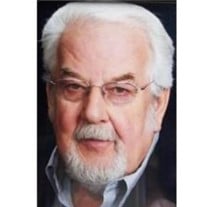 Hubert Sealy Cooper II, known as Sealy to his family and friends, died on July 6, 2021, at the age of 85. Sealy was born in Wharton, Texas, on January 11, 1936, to Hubert Sealy Cooper and Anna Belle Moers Cooper. He was preceded in death by his parents; his wife, Phyllis Marjorie Cooper; and his brother, Jerry Lynn Cooper. He is survived by brothers, David Moers Cooper of San Jose, CA, and James Bolton Cooper of East Bernard, Texas; sister, Karol Ann Cooper of Knoxville, TN; sons, Michael Cooper and wife, Diane Cooper, and Jeffery Cooper and wife, Kellie Cooper, stepsons, Mark Gustafson, Eric Gustafson; and stepdaughter, Kelly Johnson. He is also survived by five grandchildren: Kristin Barnes and her husband, Jason, Alex Cooper and his wife, Lisa, and Lacon Cooper and his wife Brooke, Kyle Jones and Brendan Jones; and six great-grandchildren: Taylor Etter, Addison Barnes, Cooper Barnes, Braiden Cooper, Lilianna Cooper and Braedyn Shipp. Sealy graduated from Wharton High School in 1953. After high school, he attended Wharton County Junior College and Texas College of Arts and Industries in Kingsville, Texas. Throughout his childhood, Sealy’s family lived in several communities including Wharton, Texas, Sheridan, Texas, and Little Rock, Arkansas. The Cooper family finally settled on a family farm in Burr, Texas, very near the town of Wharton in 1950. His father taught his four sons how to work hard and the value of hard work, convincing all of them that they did not want to be farmers. Sealy met and married Phyllis in 1977. She was the love of his life, and they were fortunate to have had 17 wonderful years together. Sealy lovingly and patiently cared for her when she was diagnosed with Alzheimer’s disease until her passing on June 25, 1994. Sealy was charming and hardworking, which contributed to his professional accomplishments. He was a successful salesman and a small business owner customizing bathrooms and closets. Sealy managed Seaco, Inc., for several years before turning it over to his sons. In his later years, Sealy enjoyed reuniting with old friends at his high school reunions – he never missed one. He was very close with his brothers, Dave and Bo, and they loved sharing humorous stories, life events, laughing, and playing dominos. He loved sharing snacks with his four-legged best friend, Max. Above everything, Sealy especially loved his family, of whom he was very proud. Sealy loved sharing holidays, jokes, and stories with them. Happiness to Sealy was a ’57 Chevy with his wife Phyllis at his side and 50’s music on the radio. He will be remembered as one of the greatest storytellers of his time, for his sense of humor, love for cars, his easy-going lifestyle, and his devotion to his family. He was a friend to all and will be greatly missed by those who had the honor to know and love him.

Hubert Sealy Cooper II, known as Sealy to his family and friends, died on July 6, 2021, at the age of 85. Sealy was born in Wharton, Texas, on January 11, 1936, to Hubert Sealy Cooper and Anna Belle Moers Cooper. He was preceded in death by... View Obituary & Service Information

The family of Hubert Sealy Cooper II created this Life Tributes page to make it easy to share your memories.

Hubert Sealy Cooper II, known as Sealy to his family and friends,...

Send flowers to the Cooper family.