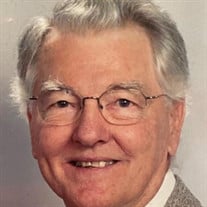 Herbert Henry Herman Jacoby (Herb) age 89, passed away on Thursday September 2, 2021. Herb was born on December 23, 1931 near Stonewall, Texas, to Erie Adolf Jacoby and Adelia Beck Jacoby. He graduated from the Albert Public School in May 1945. He served in the United States Army, stationed at the German-Russian border from May 1951 to early 1952 (during the Korean War). After returning to the States, he worked in construction for several years, building houses, schools and granaries around North Texas and in New Mexico. He met the love of his life, Ima Ruth Estes on a blind date in 1954 and they married on August 25th, 1955. He worked as an electrician at Chance Vought Aircraft when they first married, but joined the U.S. Postal Service in 1961 as the first full-time Letter Carrier for the town of Euless. He served his beloved town for 29 years before retiring in 1990. In retirement dad enjoyed active stewardship in Concordia Lutheran Church, hunting, fishing, golfing, building projects with his sons, family gatherings, and playing with his grandchildren. Herb is survived by his daughter Sylvia Jacoby of Irving, Texas, son Michael Jacoby and his wife Sheri of Fort Calhoun, Nebraska, and son Perry Jacoby and his wife Mary of Flower Mound, Texas; four grandchildren Emily, Kym, Matthew and Katie; and four great-grandchildren Ethan, Edith, Connor and Lilith. Herb was preceded in death by son Vincent, and wife Ima Ruth. A funeral service for Herb will be held at Concordia Lutheran Church in Bedford, Texas on September 11, 2021 at 11:00 am. Interment will be at Bluebonnet Hills Memorial Park in Colleyville, Texas following the funeral service at 12:30pm. Those wishing to pay their respects are welcome to join. Donations in memory of Herb can be made to the Concordia Lutheran Church Building Fund. To join the celebration at 11:00 A.M. via livestream, please clink the link below. https://video.ibm.com/channel/DURgpAb2EXm

Herbert Henry Herman Jacoby (Herb) age 89, passed away on Thursday September 2, 2021. Herb was born on December 23, 1931 near Stonewall, Texas, to Erie Adolf Jacoby and Adelia Beck Jacoby. He graduated from the Albert Public School in May... View Obituary & Service Information

Send flowers to the Jacoby family.