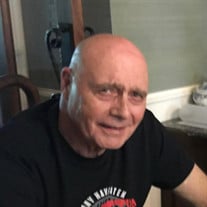 Henry Victor Barbetti II, Hank, died peacefully at age 78 on Wednesday, July 28, 2021 in Grapevine, Texas. Hank was born January 1, 1943 in the Bronx, New York, the oldest son to parents Ethel Mary and Henry. He left New York at age 17 to enlist in the United States Air Force, spending his tour of duty in Japan, where he rode his motorcycle through tiny streets and learned Japanese. After his military service, he was a security guard in Las Vegas and then worked on an offshore oil rig in Louisiana. He then worked for the Rock Island Line for 14 years. A savvy entrepreneur, Hank dealt jewelry for Lone Star Casting in the 1980s and in the following decades invested in rental properties in the DFW metroplex. Hank was a generous soul who helped many people make smart financial decisions and buy their first homes. He volunteered in Guatemala with HELPS, building water purification systems and assisting doctors with healing suffering people. He brought food and company to seniors with Meals on Wheels for 20 years. He was an avid hiker and traveler, visiting Alaska, Hawaii, Italy, the Caribbean, and the Northern Rockies. Always the life of the party, he loved good stories, good food, and good company. He had a soft spot for animals and loved his loyal dogs Budget, Murphy, Max, Mitzi, and Daisy. He was proud to be a Christian man dedicated to God. Hank is survived by his wife Anna Barbetti; his siblings Christine Barbetti-Ferguson and Chuck Barbetti; his son Victor (Claire) Barbetti, and their children Anthony, Nina, and Dante; his stepchildren Matt (Ashley) LaVelle and their children Maggie, Adam, Ava and Sarah (Nate) Echelberger and their children Breck, Ridge, Eve, and Stone. The memorial gathering will be held at Lucas Funeral Home, 700 W Wall St, Grapevine, TX 76051, at 9-11 am on Monday, August 2, 2021. His inurnment service will be held on August 20, 10:30 am at the Dallas Fort Worth National Cemetery. In lieu of flowers, memorial donations to the Salvation Army and the Multiple Myeloma Research Foundation are appreciated. I have fought the good fight, I have finished the race, I have kept the faith. 2 Timothy 4:7

The family of Henry "Hank" Victor Barbetti created this Life Tributes page to make it easy to share your memories.

Send flowers to the Barbetti family.