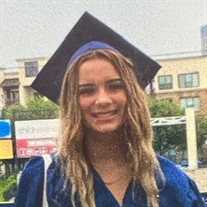 Heidi Alicia Monroe (Hammy), passed away at the young age of 19 years on Thursday, March 10, 2022. Heidi was born on October 13, 2002, at 10:55 AM at the Naval Hospital in Pensacola, Florida to Michael Shane Monroe and Blanca Perla Monroe. Heidi was a very happy, cheerful, loving, and caring person. She would light up any room she stepped foot in with her beautiful, dimpled smile, and contagious laugh. Heidi obtained her High School Diploma at Winfree Academy Charter Schools on June 7, 2021. She longed for the day she would graduate high school, so she could pursue becoming a Flight Attendant. Unfortunately, the world completely changed with COVID, so her aspirations in air travel employment were put on hold for the moment. Although, she had not yet decided on a backup career choice, she frequently talked about majoring in Art, expressing a strong desire to paint huge murals. She also considered cosmetology or even becoming an aesthetician. She did not let her indecisiveness about future employment prohibit her from expression through creative outlets such as painting, singing, and dancing, she enjoyed doing hair and makeup, and she was teaching herself how to care for succulents among other plants. Throughout the years, Heidi had a variety of pets ranging from her guinea pig, Squeaky, a fish, two miniature dachshunds (Coco and Lilly), to her very own dog, Delilah. One of Heidi’s earliest memories was of her playing outside in the side yard with her Bratz Dolls when living in Oklahoma at the age of 3 years old. She was born in Florida, moved to Virginia for about nine months, came back to Texas for two and a half years, followed by two years in Oklahoma, and finally spent the rest of her days in Texas. Heidi was destined to see the world. Her father’s time in the Navy, helped to pave her way for her love for travel. She made many travel memories throughout her life, some she thought she wanted to do, while others she resisted initially: New Mexico, Colorado, Arizona, Chicago, California, New York, Las Vegas, Hawaii, Puerto Rico, St. Thomas, as well as Mexico to visit family, just to name a few places. Her biggest fear in life was not being successful. Her life story was cut too short, and we will never know what could have been, but she will forever be in hearts. She is survived by her father Michael Shane Monroe, her mother Blanca Perla Monroe, her only brother Nikolas Luis Monroe, her stepmother Jenny Miriam Monroe, her grandparents Michael Wayne Monroe, Tammy Arlene Monroe, Cynethia Monroe, Concha Caballero, and Marcos Caballero, as well as many aunts, uncles, cousins, and an infinite number of friends. Heidi had an unforgettable smile and would bring joy and laughter to those around her. She had a beautiful soul inside and out. She will be missed by all who loved and knew her, but this is only a temporary farewell for we will meet again one day. Heidi’s funeral services will be officiated by her uncle, Freddy Montoya, on Friday, March 18, 2022, with visitation and viewing from 12p-2p, followed by the service at 2p. She will be cremated as her final resting wish, and the remains will be equally shared between her parents. The honorary pallbearers are as follows: Michael Shane Monroe, Nikolas Luis Monroe, Michael Wayne Monroe, Marcos Caballero, Christopher Monroe, and Freddy Montoya. There has been a GoFundMe account created in her honor. If you would like to make a memorial donation Thank you all for taking the time to come out and visit with Heidi to say our final goodbyes until we see her again in Heaven. In Heidi’s own words, “KKKKKEEEEEHHHHH.” (She would playfully mimic the sound of a hissing cat. This secret code was created by Heidi and her dad to get each other’s attention because Heidi always thought of herself as mean kitty may she now rest in peace).

Heidi Alicia Monroe (Hammy), passed away at the young age of 19 years on Thursday, March 10, 2022. Heidi was born on October 13, 2002, at 10:55 AM at the Naval Hospital in Pensacola, Florida to Michael Shane Monroe and Blanca Perla Monroe. Heidi... View Obituary & Service Information

The family of Heidi Alicia Monroe created this Life Tributes page to make it easy to share your memories.

Heidi Alicia Monroe (Hammy), passed away at the young age of...

Send flowers to the Monroe family.