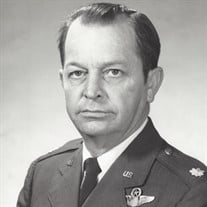 Harold Edwin Pankey Lt. Colonel (Ret) USAF April 15, 1930 - August 15, 2021 Azle, Texas - Harold Edwin (Ed) Pankey, 91, passed on Sunday, August 15, 2021 in Azle, Texas. He passed peacefully in his sleep at his home surrounded by his family and loved ones. Service: A memorial will be held at Lucas Funeral Home at 1601 S. Main St, Keller, TX, 76248 on Friday, August 20, 2021 at 2:00 PM. Click here to watch the RECORDED SERVICE. Interment will be at a later date at Dallas-Fort Worth National Cemetery, 2000 Mountain Creek Pkwy, Dallas, Texas 75211. Ed was born in West Monroe, Louisiana on April 15, 1930. He entered the US Army-Air Corps in 1948 as a non-commissioned officer. After a few years, he entered Officer Training School and became a pilot, flying several different types of airplanes including KC-135s which he flew until the end of his career. He retired as a Lieutenant Colonel in 1974 after 26 distinguished years of service. After retirement, he moved to Azle, Texas where he finished his college degree of Bachelors of Business Administration at the University of North Texas. Afterwards, he worked as a realtor, as a bailiff, and also spent 10 years with the Parker County Sheriff’s Department. Ed was a proud member of good standing for 60 years of the Freemason’s and Scottish Rite, finding a home at the Azle Masonic Lodge #161 achieving the level of 32nd degree mason. In 1959 he met and married Lumonia Nadjerine (Nadj) Gonser in Little Rock, Arkansas and had two beautiful daughters. They spent the next 62 years together devoted to their family and each other. He was preceded in death by his parents, Granville and Myrtle Pankey of Monroe, Louisiana. Ed is survived by his wife Nadj, two daughters Laura Pankey of Fort Worth, Texas, and Therese Pankey of River Oaks, Texas, his sister and brother-in-law Joyce and Harold Phillips of Santa Fe, Texas, and various nieces and nephews. In lieu of flowers, please consider a donation to either TADSAW.org - Train a Dog Save a Warrior or Michael J Fox Foundation for Parkinson’s

The family of Harold E. Pankey created this Life Tributes page to make it easy to share your memories.

Send flowers to the Pankey family.