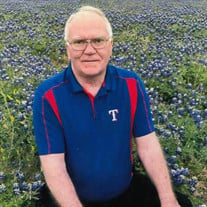 Harold Lee Browning of Bedford, Texas passed away peacefully at a local hospital on Tuesday, February 15, 2022 at the age of 73. Harold was born on May 9, 1948 in Mount Vernon, Indiana to Madge Katherine Browning-Churchwell and Walter Graden Browning. He graduated from Carmi Township High School. He married Teresa Ann Browning at Central Baptist Church in Lawton, Oklahoma on September 19, 1974. The couple welcomed two children into their family. Over the years Harold drove a truck for Bowman, Preston Dairy and Oak Farms Dairy where he was also a lead foreman. After retirement he drove for Mountain Creek Retirement Home. Harold enjoyed going bowling and playing Putt Putt golf. You could find him in his free time playing cards and dominoes or board games with his family and friends. He listened to the Gaither Vocal Band and enjoyed serving others. Harold read his Bible Verse App daily to remind himself about the word of God. He attended church and was dutifully involved in the nursery, youth group and served as an usher for the churches he attended. Harold also fulfilled the role of Mason and Scottish Rite for 20 years. His family lovingly remembers that if he picked on you, you knew he loved you. He is preceded in death by his siblings; Charles Ray Browning in 2019, Pat Newman in 2005, Mary Browning in 1944, Donald Browning in 2013, Larry Browning in 2006 and Jimmy Browning in 1976. Harold has left his memory to be cherished by his wife of 47 years, Teresa Ann Browning of Bedford; daughter, Vicki Spano and husband Brendan of Haltom City; son, Walter Browning and wife Carrie of Bedford; grandchildren, Joshua Browning and Emily Spano; sister Erma Yates and husband Bill, brothers, Bill Browning, Joe Browning and wife Sharon. Memorials: please contact Vicki Spano or Pastor James Heffington at Harwood Terrace Baptist Church to make donations in Harold’s name at [email protected] The family would like to express their heartfelt gratitude and appreciation to Pastor James Heffington and the congregation at Harwood Terrace Baptist Church, family and friends who have shown love and support to them in this most difficult time. “After Glow” I’d like the memory of me to be a happy one, I’d like to leave an afterglow of smiles when life is done. I’d like to leave an echo whispering softly down the ways, of happy times and laughing times and bright and sunny days. I’d like the tears of those who grieve, to dry before the sun. Of happy memories that I leave when life is done.

Harold Lee Browning of Bedford, Texas passed away peacefully at a local hospital on Tuesday, February 15, 2022 at the age of 73. Harold was born on May 9, 1948 in Mount Vernon, Indiana to Madge Katherine Browning-Churchwell and Walter Graden... View Obituary & Service Information

The family of Harold Lee Browning created this Life Tributes page to make it easy to share your memories.

Send flowers to the Browning family.