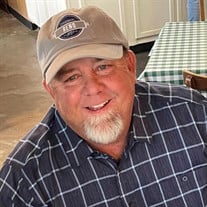 Guy Force, 56, passed away peacefully surrounded by his family on Friday, September 9, 2021 in Fort Worth, Texas. Guy was born on April 3, 1965 to James Everett Sr. and Bonnie (Newland) Force in Denver, Colorado. His years were split between both Colorado and Texas of which he both loved very much. After graduating from LD Bell High School in 1983, Guys life work was centered mostly in the painting and construction field, however, his true passion for life was being available for family and friends, old and new, near, and far, and his daughter Brooklyn. His time spent with his Boo was invaluable whether it was spent at family/friend gatherings, sporting events, or just hanging out. The Newland family reunion never disappointed as Guy was a two-time horseshoe champ and was proud to have his name on the coveted trophy. Guy had multiple nicknames given by his great friends such as, G, G-Force, and G-Money, all of which he wore proudly and likely have many stories to back them up. He was a super competitive and loyal sports fan which carried him through his many years of participation. However, his final years were spent using his knowledge to help coach most of Brooklyn’s teams up until high school and guide not only his own daughter but many other young individuals. Most will remember Guys kind and loving heart that set him apart from others and will be missed by all. He was preceded in death by his mother, Bonnie Jean Roberts in 2005, and father James Everett Force Sr. in 2008. Those left behind to cherish his memories are his daughter, Brooklyn Landry Force (Boo) and her mom Kristi Niblett Force of Paradise; his sisters, Cindy Force Crain and husband David of Saginaw and Debbie Force Lockett and Neil Miller of Justin; his nieces and nephews, Nicole Goodsell and husband Jeff (Felicity, Logan and Katy), Jack Stone (Lucas), Crysta Mikulskis (Tatum, Anthony and Caley), Caitlyn Crain and Alana Lockett. He also leaves numerous uncles, aunts, and cousins along with many great friends.

Guy Force, 56, passed away peacefully surrounded by his family on Friday, September 9, 2021 in Fort Worth, Texas. Guy was born on April 3, 1965 to James Everett Sr. and Bonnie (Newland) Force in Denver, Colorado. His years were split between... View Obituary & Service Information

The family of Guy Force created this Life Tributes page to make it easy to share your memories.

Guy Force, 56, passed away peacefully surrounded by his family...

Send flowers to the Force family.