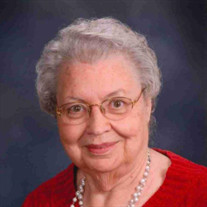 Grace Marie Harvey, 91, passed away on Sunday, August 8, 2021 at her home in Hurst, TX. SERVICES: A funeral service will be held at 10:00 am on Thursday, August 12, in the Lucas Funeral Home Chapel, 1321 Precinct Line Road, Hurst, TX. The family will receive friends from 6:00-8:00 pm on Wednesday, August 11 at the funeral home. Grace was born on October 24, 1929 in Ralls, TX to J. Russell Noble and Ruth Davis Noble. Grace and Evert Harvey were married in 1948. As longtime Hurst residents, together, they raised 5 beautiful children. She was a devoted wife, mother and Big Mama. Big Mama was a title she proudly held, it’s often how she introduced herself. Big Mama’s house was just down the street from the Junior High where you could always go and be treated like you belonged. Nobody ever left hungry or unloved. Baseball was her passion, she rarely missed a Texas Ranger game on TV. As an official scorekeeper with Tri Cities for over 25 years, she definitely knew the difference between a base hit or an error. Grace was a member of PTA, First United Methodist Church in Hurst, Hurst senior citizens walking group, chair yoga exercise group, Meals on Wheels delivery volunteer and UAW Retirees (where she brought deviled eggs to every meeting). Her hobbies included reading, crocheting, cooking, domino’s/42, crossword puzzles, walking at the Hurst Senior Rec Center and keeping tabs on all her beloved family. Her devotion to family is unmatched. Grace truly was the matriarch of the Harvey bunch. She was preceded in death by her parents, J. Russell & Ruth Davis Noble; husband, Evert Harvey; son, Lloyd Harvey; grandsons, Jefferson Goad & Bobby Godbee; four brothers and one sister. Grace is survived by sons, Tom Harvey & wife, Cathy and Freeman Harvey & wife, Lori; daughters, Ellen Willett & husband, Jim and Novella Clay; 12 grandchildren; 21 great-grandchildren and 2 great-great-grandchildren. In lieu of flowers, if you wish, the family would like a donation to be made, in her honor, to the Ronald McDonald House Foundation.

Grace Marie Harvey, 91, passed away on Sunday, August 8, 2021 at her home in Hurst, TX. SERVICES: A funeral service will be held at 10:00 am on Thursday, August 12, in the Lucas Funeral Home Chapel, 1321 Precinct Line Road, Hurst, TX. The family... View Obituary & Service Information

Send flowers to the Harvey family.