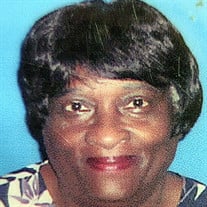 Glodean Smith Leadon was born on September 16, 1933, in Tenaha, Texas, the first of seven children. Her parents, Thomas “T. S.” Smith and Jothena “Polly” Goodwin Smith were hardworking farmers. Glodean’s parents did their very best to instill a strong work ethic and a love of God into all their children. Glodean listened. She accepted Christ at an early age as a member of Bennett Chapel Missionary Baptist Church. She also excelled in school. She was the first member of the family to attend and graduate from college. As a proud graduate of Prairie View A & M University, she earned her teaching certificate. Glodean’s teaching experience spanned the state of Texas. She taught multiple grade levels in a one-room schoolhouse in West Texas and she traveled back home to East Texas to teach in the area where she grew up. While on a break from teaching, Glodean made a trip to Fort Worth, Texas. During this brief excursion, she met the love of her life, Charlie Leadon. The two were married on December 26, 1967 and relocated to Fort Worth. Glodean continued her teaching as an employee of the Fort Worth Independent School District until she and Charlie were blessed with their twins, Charlene and Tracy, three years after their union. She took a short hiatus from teaching to focus on her family, but soon went back to the career she loved, teaching. Glodean was also in search of her next church home. She visited many churches, but she eventually found her forever home at Rising Star Missionary Baptist Church. She began her ministry on the church usher board, and she enjoyed serving her congregation in this role. She was always early to her post, welcoming to the parishioners and excited about hearing the word of God. One of her most beloved activities in her role as an usher were the “pot-luck” fellowships that took place around the holidays. Glodean remained a very active member of the usher board until her health declined. Glodean was a teacher. She invested 43 years into the profession. Glodean was a life-coach. If you did not know what to do in a situation, she was happy to give you advice. Glodean was a woman of God. She studied her bible and did not mind supporting you in a bible study if you needed help. But most importantly, Glodean was mama. She was mama to her beloved twins and to all of those around her who needed her listening ear. She is preceded in death by her husband of 29 years, Charlie Leadon, a daughter, Dorothy Leadon Briggs, a brother, Bill Smith and two sisters, Irma Jean Smith Rushing and Velma “Little Polly” Goodwin. Glodean leaves to cherish her memory daughters Charlene Leadon Louis (Kemp), Tracy Leadon and Delores Leadon Atkins; five grandchildren, Jeremy Louis, Graham Louis, Ashlyn Louis, Jason Atkins, and Christina Briggs Amos; one brother, Henry Smith (Alice); three sisters, Gloria Smith Moore, Nettie Ruth Smith Clemons (Odell), Tommye Joy Smith Jones (Joe); one sister-in-law, Velma Leadon Johnson and a host of nieces, nephews, other relatives, and friends. Visitation: Friday, February 5, 2021, 5-7 p.m. at Lucas Funeral Home, 700 W. Wall St. Grapevine, TX. Funeral Service: Saturday, February 6, 2021 at 1 p.m. at Lucas Funeral home with graveside services to follow at Grapevine Cemetery. Because of the limitations on attendance, family and friends can watch the service via live stream at : https://video.ibm.com/channel/23814965/video/ii61jy

Send flowers to the Leadon family.