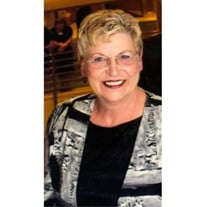 Glenda Toler Johnson, age 78, of Bedford, Texas passed away on Monday, July 26th at Forum Parkway Health and Rehabilitation in Bedford, Texas. A Memorial Service will be held at Lucas Funeral Home on Saturday, August 7th, at 2:00pm. Retired St. Paul Methodist Pastor Marc Lowrance will be officiating. Glenda was born in Shamrock, Texas to Allan Morgan Toler and Glendean King Toler on April 4th, 1943. Her family moved to Victoria, Texas in 1953 where she lived until her senior year in high school. In 1960, her family moved to Hurst, Texas where, officially, she graduated from L. D. Bell High School in 1961. But she had left behind a large number of lifelong friends in Victoria, and always claimed Victoria High as her alma mater. After graduating high school, she then attended the University of North Texas where she met the love of her life, Ray Johnson. They married in Hurst, Texas on June 29th, 1963. While attending UNT, she received a Bachelor of Arts degree in Speech, Theater and English (class of 1964) then later a MA in English and Communications (class of 1969). Glenda returned to UNT in 1983 for Marketing Education certification as well. After graduating, Glenda worked for a publishing company for a year and then in 1967 started teaching at Central Junior High where she got an opportunity to pursue her true passion – teaching. In 1968 she was hired to teach English at Trinity High School in Euless, the year it opened. She taught at Trinity for 29 years where she formed many lifelong friendships. She retired from public school teaching there in 1997. She did substitute teaching for a while but missed the daily interaction of her students and observing their growth. In 1999 she became an instructor at Northwood University where she taught English Composition and Literature until spring of 2016. In the fall of 2017, she volunteered to teach a senior Films Course at Tarrant County College and she loved it. She taught this class until her health would no longer allow it this past spring. Glenda loved teaching and she loved her students – she has kept track of many through the years and many have reached out since her passing. She also loved the arts, especially theater and movies; she has been a season ticket holder to Bass Hall since the year it opened. But most of all she loved her many close friends and her family, especially her grandchildren of whom she was most proud. Glenda is preceded in death by her parents, Allan Morgan Toler and Glendean King Toler, and her husband Ray Johnson. Glenda is survived by her son Chris Johnson and his wife Rebecca; her daughter Stacey Johnson Warner and her husband Jonathan; her grandson Nate Johnson and his wife Renata; her granddaughter Alaina Johnson Thill and her husband Griffin; her grandson Garrett Warner; her grandson Cooper Warner; her brother Michael Toler and his wife Marybeth; her brother Bill Toler and his wife Melanie; many nieces and nephews; lifelong friends Martha and Doyle Lee, Harry and Martha Siegel; and her two beloved dachshunds, Mollie and Chloe. Following the memorial service, there will be a reception for friends and family at the Holiday Inn Express, 820 Thousand Oaks Dr., Hurst, Texas. In lieu of flowers, the family requests donations to Central Texas Dachshund Rescue at http://www.ctdr.org for the work they do finding homes for Dachshunds and their ongoing care of Molly and Chloe.

The family of Glenda Toler Johnson created this Life Tributes page to make it easy to share your memories.

Glenda Toler Johnson, age 78, of Bedford, Texas passed away on...