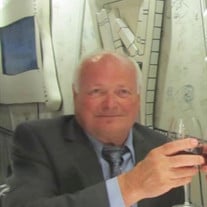 Grapevine, TX - Giuseppe Gallucci, 81 passed away Friday March 25, 2022 Surrounded by his wife and children. A memorial service for Giuseppe will be at 2pm ct on March 29, 2022 at Lucas Funeral Home Grapevine, TX. Please join us in person or watch the service via live stream. In lieu of flowers a memorial donation may be made to any of the following charities that helped us through this difficult time. Catholic Charities of Fort Worth at: https://secure.catholiccharitiesfortworth.org/ or the American Cancer Society at: https://donate3.cancer.org/ Giuseppe was born July 26, 1940 in Castelforte, Italy to Guido Gallucci and Vincenza (Gilda) Lioniello. In 1961 he moved to England and worked as a skilled barber. In 1963 he immigrated to the United States and started working at his Uncle Pierino (Perry) Gallucci’s barbershop the next day. In 1969 he started his aviation career with Pan American Airways. In 1970, Giuseppe attended his cousin Anthony Gallucci’s wedding where he met the love of his life Filomena Ragucci who was attending the same wedding, for her cousin Carmela Pirozzolo. They married a year later on April 30, 1972 at the Shalimar in Staten Island, NY. They settled in Queens, NY where he became father to three loving children. He traveled frequently to locations around the world, especially to his native Italy where he would make olive oil every November. He was also an avid winemaker and throughly enjoyed and shared the fruits of his labor, especially red. Giuseppe retired from Delta in 2004. In 2018, he and Filomena decided to spend their golden years with their daughter Victoria, enjoying the warmer climate of Euless, TX. Preceded in death by his late parents and his brother Antonio Gallucci. Survivors: Wife, Filomena; Children, Victoria Bushey & Craig, Guido Gallucci & Michelle Orren, and Anna Maria Capuozzo & Toni; Grandchildren, Elizabeth, Dorotea, and Michael; Numerous loving family & friends. The memories he gave us will live on forever.

Grapevine, TX - Giuseppe Gallucci, 81 passed away Friday March 25, 2022 Surrounded by his wife and children. A memorial service for Giuseppe will be at 2pm ct on March 29, 2022 at Lucas Funeral Home Grapevine, TX. Please join us in person... View Obituary & Service Information

Send flowers to the Gallucci family.