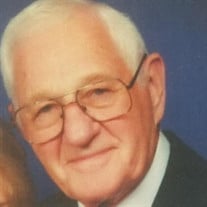 The world lost a compassionate gentleman, Gilbert R. Muhlenbruch, age 88, who died peacefully at home on Thursday, January 28, 2021 in Grapevine, Texas. Gil and his wife Frances had just relocated near family in Grapevine after spending over 60 years in Wappingers Falls, NY. Gil was born in Dows, Iowa on May 15, 1932 to the late Art and Ione Muhlenbruch. He left the farming life for military service and while stationed in New Jersey, he met and married Frances, the love of his life. They lived in Iowa while he pursued a degree in Electrical Engineering from Iowa State University and upon graduation moved to Wappingers Falls where he worked for IBM from 1960-1993. Gil was a dedicated family man. He is survived by his wife Frances of 64 years, and their 4 children and families: Nanette Neelan (Colorado), Lynne Muhlenbruch and spouse Ron Grimes (Texas), Curtis and Amelia Muhlenbruch (St. Kitts), and Melissa Muhlenbruch (Maryland). He is survived by his granddaughter Christine Horstmeyer, her spouse Michael, and great granddaughters Zoe and Ellie (Texas); and grandsons Michael, Jacob and Robbie Fields (Maryland). Additionally he leaves behind his loving brothers and sisters in Iowa: Herb (deceased)) and Jane Muhlenbruch, Delbert and Kathy Muhlenbruch, Shirley and Arnold (deceased) Klemme, Darwyne and Linda Muhlenbruch, and Neil and Kathie Muhlenbruch. Gil was passionate about his civic duties. He loved spending time with the Knights of Columbus, where he enjoyed many years of service including Grand Knight, He was also very active in St. Mary’s Church, serving as one of their first Eucharist Ministers. Family and friends remember Gil’s gentle, caring, light-hearted human spirit. He was always there to listen, advise, and give a helping hand. In lieu of flowers, donations can be made to St. Mary’s Church, Wappingers, NY or St. Jude’s Children Research Hospital. There will be a celebration of his life later in the year.

The world lost a compassionate gentleman, Gilbert R. Muhlenbruch, age 88, who died peacefully at home on Thursday, January 28, 2021 in Grapevine, Texas. Gil and his wife Frances had just relocated near family in Grapevine after spending over... View Obituary & Service Information

The family of Gilbert Ray Muhlenbruch created this Life Tributes page to make it easy to share your memories.