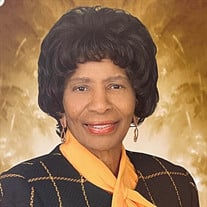 Gertrude Maude Johnson, 98, of Bedford, Texas, formerly of Houston, Texas passed away at home on July 28, 2021 from Natural Causes. She was born on December 24, 1922, in Baldwin, Louisiana to George and Gladys Smith. Gertrude married Thomas Johnson, Jr. in January 1946. This union was blessed with 2 children, Wilma and William. Before her marriage she attended Jack Yates Senior High School. She joined St. John Baptist Church at an early age and was baptized by the late Reverend S. A. Pleasant. Gertrude taught Sunday School for many years and their class grew and they consistently won the banner. She worked as a secretary for DePelchin Faith Home. After retirement, she acquired an avid interest in the elderly and started delivering Meals on Wheels to the elderly and infirmed. She loved baking bundt pound cakes and started a thriving business especially on holidays and special occasions. People would drive miles to purchase one of her cakes. She sold cakes to many people in the DFW area from Houston. Some of Gertrude’s hobbies include sewing, reading, and cooking. She also had a passion for gardening. She grew flowers such as (Bird of Paradise) and had a vegetable garden. She contributed to St Jude Children’s Hospital, Easter Seals to name a few. Gertrude is survived by her daughter, Wilma J. Watkins, of Bedford, Texas; granddaughter, Kelilah R. Johnson, of Houston, Texas, and grandson Eric G. Clayton, of Miramar, Florida. She is predeceased by her husband, Thomas Johnson Jr. October 2, 1983; son, William G. Johnson, June 30, 2002; grandson, Barri J. Johnson, October 27, 1998; brothers, Willie Smith, October 11, 2004, LeRoy H. Smith, July 18, 1975, Claude Smith, July 17, 1988, and Naman J. Smith, December 3, 1989; and sister, Victoria Green, November 7, 2004.

Gertrude Maude Johnson, 98, of Bedford, Texas, formerly of Houston, Texas passed away at home on July 28, 2021 from Natural Causes. She was born on December 24, 1922, in Baldwin, Louisiana to George and Gladys Smith. Gertrude married Thomas... View Obituary & Service Information

The family of Gertrude Maude Johnson created this Life Tributes page to make it easy to share your memories.