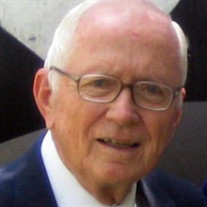 Gerald Walker Mcleod, 91, of Richland Hills, passed away at his home on February 20 after being hospitalized for respiratory problems. He was a faithful member of the Primitive Baptist Church. Gerald was born in Vivian, Louisiana to John Bernard and Winnie Walker Mcleod. He grew up with 9 siblings on his family’s farm in Mcleod, Texas. As a boy, he loved spending time fishing with his brother Curtis on nearby Frazier’s Creek. This began a lifelong love of fishing for both of them. Gerald and Curtis would have many fishing trips together over the years as well as countless others with friends and family. Gerald was a member of the 1946 McLeod Longhorn Varsity Football team. The team was notable for going the entire season undefeated, untied and unscored upon, a state record that still stands today. An accomplished musician, he played the cornet in the McLeod School Band. After high school he married Tina Marie Joyce, his high school sweetheart, and moved to Austin, Texas to attend The University of Texas. Gerald and Tina both worked full-time jobs to pay his way through college. Gerald graduated in 1952 with a bachelor’s degree in mechanical engineering. After graduation, he and Tina moved to Fort Worth where he went to work for Bell Helicopter as a draftsman. His career progressed, eventually moving up to lead an engineering group and retiring after more than 37 years. His wife Tina, passed away in 1981. In 1983 he married his second wife Bette, who passed away in 2008. Gerald enjoyed watching his favorite sports teams that included the UT Longhorns, Dallas Cowboys, Texas Rangers and the Fort Worth Cats. He was an accomplished gardener and avid woodworker, supplying the people he loved with wooden projects and bushels of vegetables. He was preceded in passing by his wives Tina Joyce and Bette Fulmer; his parents John Bernard and Winnie Walker Mcleod; sisters Opal Utley and Merle (Clyde) Sparling; brothers Olin McLeod, Max (Jean) Mcleod and Curtis (Joy) Mcleod; Sister-in-laws Bonnie McLeod and Joy McLeod He is survived by his sisters Linda (John) Crosby, Judy Williams and Meredith Dunton; brothers John (Bonnie) Mcleod and James Mcleod; sisters-in-law Jean McLeod and Mary Hite; brother-in-law John (Martha) Joyce; daughter Laura (Donny) Anderson and sons Richard Mcleod, Mark Mcleod, Scott (Susan) Mcleod and John Mcleod; Stepchildren Ginger Harmon and Michael Davis; grandchildren Tiffany (Tony) Saddler, Justin (Nicole) Mcleod, Julie (Chris) Branum, Kayla (Colin) Frisinger, Houston (Jessica) Anderson, Lance Davis and Dylan Moore plus 8 great-grandchildren. A graveside service will be held at Bluebonnet Hills Memorial Park in Colleyville, Texas on March 4 at 3:00 PM. On Thursday, March 4, 2021 at 3:00 p.m. a Live Stream of Gerald Walker McLeod's Graveside Service will be viewable here https://video.ibm.com/channel/23847896/video/pal8oq

Gerald Walker Mcleod, 91, of Richland Hills, passed away at his home on February 20 after being hospitalized for respiratory problems. He was a faithful member of the Primitive Baptist Church. Gerald was born in Vivian, Louisiana to John Bernard... View Obituary & Service Information

Gerald Walker Mcleod, 91, of Richland Hills, passed away at his...

Send flowers to the McLeod family.