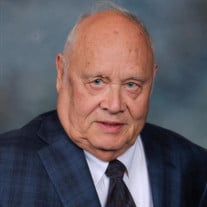 Gerald Steward McCorkle (Jerry), age 86, passed away on February 13, 2022 in Keller, TX. Jerry had a distinguished career in solid rocket motor engineering and had a brilliant mind. He was especially proud of his 35 year career at Lockheed Martin (formerly LTV). Jerry will be remembered by all who knew him by his intelligence, his devotion to his family, and his willingness to help others in need. Jerry was born in Hatch, NM on March 26, 1935 to Ray McCorkle and Nellie Starr. He grew up in Yuba City, CA and graduated from Berkley with a degree in Chemical Engineering. Later, he received a masters degree in Engineering Science from SMU. Jerry relocated to Texas to work for LTV where he met Carol, the love of his life. During their 50 year marriage, Jerry and Carol resided in Irving where they raised 3 daughters and enjoyed life-time friendships with their bridge club. After retiring, they traveled around the world to many different countries. Jerry also traveled around the United States photographing nature. Additionally, Jerry’s love of history led to his completion of a masters degree at UT Arlington. Jerry leaves behind three daughters: Anne McCorkle Garrett and husband Joe of Baldwin, MD, Julie Hester and husband Dan of Keller, TX, and Elizabeth Barron (Beth) and husband David of Centennial, CO. He also leaves behind six loving grandchildren: Rebecca and Daniel Thompson, Emily and Katie Hester, and Alexa and Ryan Barron. Sister Jeanine Rounds of Provo, UT also survives him. The family will begin receiving friends at the visitation at Keller United Methodist Church in Keller, TX on Friday, February 18th at 11:00 am with the Funeral service following at 12:00 pm. Interment will follow at Moore Funeral Home and Memorial Gardens in Arlington, TX at 2:00 pm. In lieu of flowers, the family has requested donations be made to: Alzheimer’s Foundation http://www.alz.org/

Gerald Steward McCorkle (Jerry), age 86, passed away on February 13, 2022 in Keller, TX. Jerry had a distinguished career in solid rocket motor engineering and had a brilliant mind. He was especially proud of his 35 year career at Lockheed... View Obituary & Service Information

The family of Gerald Steward McCorkle created this Life Tributes page to make it easy to share your memories.