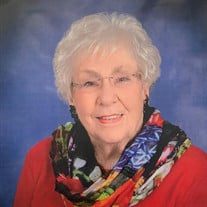 Georgia Duncan, passed away from this life on January 1, 2022. A graveside service will be on Wednesday, January 5, 2022 at 2:00 pm at Arwine Cemetery. Visitation will be on Tuesday, January 4, 2022 at Lucas Funeral Home, 1321 Precinct Line Rd. Hurst, TX from 6:00- 8:00 pm. Georgia was born in North Richland Hills/Smithfield on June 19, 1919 to Willie Hazel and Minter Guy Reeves. She is known to many as “Daught”, because her little sister could not pronounce “Daughter” and the nickname stuck. She grew up in rural Hurst, on a dairy farm, went to school in Hurst Tx and graduated high school from Paschal High School in Ft. Worth in 1936. She attended Texas Wesleyan College and graduated in 1939 with a degree in Music Education. She taught at William James Junior High, where she met the love of her life Herman H. Duncan Jr. They were married on October 4, 1947 and were married for 46 years. Georgia and Herman continued their education and received Master’s Degrees in Guidance Counseling and they both worked as Counselors in FWISD. She retired in 1976 not long after Herman retired. They built their home in Richland Hills Tx in 1950 on Dover Lane and Georgia was still residing there. Herman and Georgia were very involved with raising and breeding cattle. They had a farm in Haslet where they raised Angus cattle and then later a farm in Cash Tx, where they raised and breed Pinzgauer cattle. Georgia was very involved in the International Pinzgauer Association and traveled to many competitions and meetings in Australia, Austria, Switzerland, and South Africa. Where ever she went she always made lifelong friends, who later came to the States to visit. Georgia also loved to ride horses, and she would often ride in the Ft. Worth Stock Show Parade. Georgia was a charter member of Richland Hills Methodist Church, now renamed as City Point UMC. She was very involved in the Fidelis Class and church activities. Georgia was an avid sports fan and loved watching Dallas Cowboy, Texas Ranger and Maverick games. She also loved playing card games and Mexican Train dominos with friends and family members. Survived by sister, Mary Ruth Ellis; nephew, David Ellis and wife Janet; niece, Deana Hoffman and husband Bill; niece Lisa Pellitier and husband David; nephew Todd Ducan; and many great nephews and nieces, cousins and a host of friends. Much appreciation to her loving care givers; Mayge Ford, Subrinda Barclay, Luz Canales, and Sherri Curtis. Their dedicated and loving care allowed Georgia to live in her home and have a full life. Memorial gifts in Georgia’s name may be made to City Point Methodist Church Endowment Fund or Arwine Cemetery Association (see website for donation information).

Georgia Duncan, passed away from this life on January 1, 2022. A graveside service will be on Wednesday, January 5, 2022 at 2:00 pm at Arwine Cemetery. Visitation will be on Tuesday, January 4, 2022 at Lucas Funeral Home, 1321 Precinct Line... View Obituary & Service Information

The family of Georgia Laverne Duncan created this Life Tributes page to make it easy to share your memories.

Send flowers to the Duncan family.