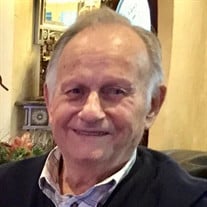 Gene Frederick Thomas was born in Columbus, Ohio on February 17, 1927 and was raised by his mother, Ruth [née: Wilbarger] and step-father John Ryland. Gene was baptized, and subsequently confirmed his Christian faith at Linden Lutheran Church. Raised in the suburb of Linden, he attended McKinley High School and was a member of the track team. Armed with a strong sense of community, faith, and civic duty; he served his country by enlisting in the United States Army in June 1945 until his honorable discharge in November 1946. While studying Business Administration at Bliss College in Columbus, Gene met the love of his life Audrey Susan Ball. The two were married on July 23, 1949 in Columbus, Ohio, and gave birth to their only child, Michael. In 1955, the young family moved to Detroit, Michigan where Gene accepted a position with Fruehauf Trailer Corporation. As Finance Manager, his responsibilities grew with the company over the next 17 years, even international work which involved some travel to their plant in Mexico City. Gene continued his active and social nature, pitching for the company’s softball team and enjoying golf outings. As members of Christ Lutheran Church in the suburb of Warren, the family’s faith continued to deepen, and Gene served as church council president and worship assistant on Sunday mornings. In 1979, Gene and Susan relocated to Nashville, TN where he worked with Transport Acceptance Company before transferring to Jacksonville, FL. The loving couple found their ultimate home in 1981 when they moved to North Richland Hills, Texas. Gene earned his nickname “the hammer,” while working with Hobbs Trailer Corporation in the repossession area until his retirement in 1992. Even in retirement, Gene served others and worked to brighten the lives of those around him, delivering flowers for Davis Floral Designs and working as an election judge for Tarrant County. He took pride in giving tours of the new Texas Rangers Stadium. Rooted in their faith and community, he and Susan were members of Calvary Lutheran Church in Richland Hills, where he served as a member of the internship committee and two terms as church council president. Gene was a devoted member of the Mosiah Shriners International. For over 50 years, he was involved as a Mason of the A&A Scottish Rite of Freemasonry of Fort Worth, Texas and a Master Mason of the Grand Lodge of Texas, Richland Hills. Gene loved to support local restaurants and was a regular at Babe’s and Dunston’s, where the staff all knew him by name. He enjoyed traveling, hosting friends and family, and beating his grandsons in cards, particularly Euchre. Gene is survived by his son Michael Thomas and daughter-in-law Jacqueline of Fremont, NE; grandsons Christopher, Scott, and Erik, as well as his great-granddaughter Genesis-Dolce. Additionally, nieces Diane (and Chuck) Ailes of Roseville, CA; Nancy (and Jack) Paddon of Newcastle, CA and numerous grandnieces and nephews. Gene was preceded in death by his wife Susan; parents Ruth and John; brother-in-law, Webb Ball and wife, Gloria. Please direct any memorials to Calvary Lutheran Church Internship Fund. Gene leaves behind a lasting and profound impact on his community and family, and now receives his promised reward of everlasting peace in the presence of his Lord. Visitation: Lucas Funeral Home 1321 Precinct Line Road Hurst, Texas 76053 817-284-7271 Date & Time Wednesday, October 13, 2021 Family receiving guests: 6:00 PM – 8:00 PM Masonic Rite: 7:45 P.M. Funeral Service at: Calvary Lutheran Church 7620 Baker Blvd Richland Hills, TX 76118 817-284-8724 Date & Time: Thursday, October 14, 2021 @ 9:30 AM With family receiving guests: 8:30-9:30 AM Light Reception following worship Interment at National Cemetery at 11:30 AM with military honors

Gene Frederick Thomas was born in Columbus, Ohio on February 17, 1927 and was raised by his mother, Ruth [née: Wilbarger] and step-father John Ryland. Gene was baptized, and subsequently confirmed his Christian faith at Linden Lutheran Church.... View Obituary & Service Information

Gene Frederick Thomas was born in Columbus, Ohio on February...

Send flowers to the Thomas family.