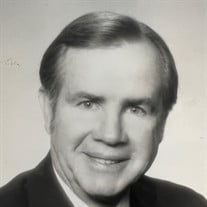 Gene Stimmel was born on March 18th, 1929 in Haskell, a small West Texas town. He lived a monumental life measured in love, laughter, family, and friends until his passing on January 9th, 2022. Gene is survived by his loving wife Billie; his three sons, Bill Stimmel and his wife Terri, Bryan Stimmel and his wife Annette, Grady Stimmel and his wife Paula, Daughters, Lisa Wood, Lorie Bashlawi and her husband John, grandchildren Ryan, Russell, Jake, Jennifer, Megan, Alyssa, eight great grandchildren, and many extended family and dear friends. Gene grew up in Falls County, TX where he spent time outside of grade school helping out at the Stimmel Grocery Store in Cedar Springs. After graduating from Lott High School in 1946, Gene took a position with Consolidated-Vultee Aircraft Company in Fort Worth. In December of 1950 he made the decision to serve his Country and enlisted with the United States Army. After training with the 2nd Armored Division at Fort Hood, the division was deployed to Germany in July of 1951. Within a few months he transferred to the 15th Constabulary Border Patrol Squadron where he spent the remainder of his military service career performing vital border duty to aid in the preservation of a budding European Democracy. Following his discharge from the Army, Gene enrolled at North Texas State College in Denton, TX, where he earned both his Bachelors and Masters degrees in Physical Education and Education respectively. Gene then joined the Hurst Euless Bedford School District as a 9th grade Coach and Teacher where he was charged with educating and shaping a new generation. Having taken his duty to heart, he was elevated to Principal of Hurst Junior High School in 1960 and held that position until 1966. After 9 distinguished years with the HEB School District, Gene was offered an opportunity with Dallas Junior College becoming an initial member at the inception of the system’s Physical Education Department. After establishing Stimmel & Company Realtors in the late 1960’s, Gene decided to devote all his time and energy to real estate In 1978. Stimmel & Company soon became one of the most successful and renowned Real Estate companies in the greater HEB area during its time. While being quite active in the real estate community, Gene was honored with many appointments and accolades including President of the NETC Board in 1975, Realtor of the Year, and Director of the State and National Board of Realtors. In 1982 he was appointed Chairman of the Texas Real Estate Commission by then Governor Bill Clements and served a six-year term. In the 1980s Gene served as a Director for Texas Commerce Bank in Hurst, and served as Executive Officer for the Arlington Board of Realtors in the 1990’s. Gene was a champion of the community, a standard-bearer for his family and has indelibly left his mark on those he met and called friend. In lieu of flowers please consider donations to St Jude's Children's Research at: https://www.stjude.org/donate/ or to the Salvation Army at : https://secure.wfpusa.org/donate/send-food-save-lives

Gene Stimmel was born on March 18th, 1929 in Haskell, a small West Texas town. He lived a monumental life measured in love, laughter, family, and friends until his passing on January 9th, 2022. Gene is survived by his loving wife Billie; his... View Obituary & Service Information

The family of Gene Stimmel created this Life Tributes page to make it easy to share your memories.

Send flowers to the Stimmel family.