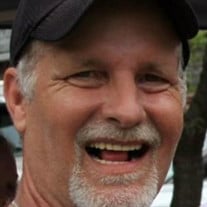 Truck driver and Navy veteran, Gary Russell, had many passions. Family. Travel. Riding motorcycles. Scuba diving. Shopping (a virtual pro). Great Friends and great food. Gary slipped into his eternal sleep on June 29th, 2021, at the age of fifty-six. He was at home surrounded by his loving wife Cindy and family. Gary was born in Dallas, Texas, on August 8th, 1964, to Wayne Russell Sr. and Melba Moss. After graduating from Wills Point High School in 1982, he enlisted with the Navy and began his military career the next year. He was a proud Aviation Boatswain’s Mate Equipmentman (ABE) on the USS Ranger CV-61. During his career in the Navy, he was part of operations in the Pacific and Indian oceans with ports of call in the Philippines and Hawaii. After completing his service in the Navy, he began a lifelong career as a truck driver. During his long career, he drove more than 1.5 million miles. A primary passion of Gary’s was Harley Davidson motorcycles. Riding Harleys was an activity that brought Gary and Cindy together. They married on June 10th, 2006, at Strokers Ice House in Dallas. Their shared passion for riding brought them years of joy and many happy miles. They enjoyed the Sturgis Motorcycle Rally and those held in TX as often as they could and even participated in a Guinness Book World Record-breaking ride for the longest Harley Davidson parade ever assembled. Gary loved to collect Harley Davidson dealership-specific shirts, poker chips, and other memorabilia and participated in the Harley Davidson Passport Tour, which took them to 29 dealership locations throughout Texas. Gary and Cindy didn’t only love long rides. He truly had a passion for travel and adventure. He and Cindy spent most of their anniversaries in the Bahamas enjoying the beach as well as scuba diving and snorkeling. His love for travel transformed most recently into RVing. He and Cindy would go camping with his brother Wayne and his wife LeAnn. He and Cindy completed two trips in the past year that Gary had been planning for many years. The first was to Milwaukee to visit the Harley Davidson factory and museum. The second was to eastern Tennessee, where he and Cindy drove the Tail of the Dragon, visited Gatlinburg, Pigeon Forge, and Lynchburg, home of the Jack Daniel’s distillery. He is survived by his wife Cindy Russell; his children Kendrick Russell, Holly Emery and Valerie Livermore; his grandchildren, Revelyn, Corbin and Abella; his brother Wayne Russell, sister-in-law LeAnn Russell and his nieces Amanda Ellis and Michelle Russell. The Visitation will be July 5th, 2021, from 6 to 8 pm at the Lucas Funeral Home in Grapevine. The service will be July 6th, 2021, at 11 am at the Dallas-Fort Worth National Cemetery, where casual dress code is requested. The family will be in Harley Davidson T-Shirts and blue jeans to honor his passion for riding. In lieu of flowers, memorial contributions may be made to One Tribe Foundation (formerly known as 22Kill), an organization very close to Gary’s heart, a suicide prevention non-profit that focuses on the United States military veterans and first responders and medical front-line workers.

The family of Gary Lynn Russell created this Life Tributes page to make it easy to share your memories.

Truck driver and Navy veteran, Gary Russell, had many passions....

Send flowers to the Russell family.