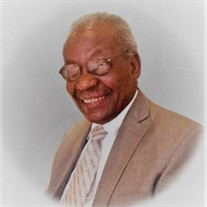 Fred Leon Bassett of Chicago, Illinois lost his battle with COVID-19 and passed away at Baylor Scott & White Medical Center in Grapevine, Texas on January 31, 2021. He was 87 years old, and just six days shy of his 88th birthday. In October 2013, he and his wife made the decision to leave Chicago, and claimed Fort Worth, Texas as their new home. Fred was born on February 6th, 1933 in Geiger, Alabama to Alzada Johnson Bassett and Alpheaus Bassett (both deceased). He graduated from North Sumpter High School in Panola, Alabama where he was very active with extra-curricular activities. He served as Editor-in-Chief for the high school yearbook. He was vice-president on the Senior Officers Board. He was member of the Drama Club and School Chorus, and he was valedictorian of his graduating class. After graduating he joined the US Army and served in the Korean War. After serving his time in the US Armed Forces, he had a very long career of 40 years with the Chicago Transit Authority working as a bus operator. He later retired enjoying life with his lovely wife, Ora Bassett. He enjoyed gaining knowledge of any sort. He spent most his time watching documentaries on the History Channel, National Geographic, and his favorite preacher, Bishop TD Jakes. He was predeceased by his two brothers Lovell Bassett and Julius Bassett. He is survived by his wife Ora Bassett, his five children Lenin A. Bassett Sr. (Patricia) Maywood, IL, Greta Kuptz (Stephen) Maywood, IL, A. Jeffrey Bassett (Shina) Lantana, TX, Sharon Christensen (Daniel) Aurora, iL and Carol Reynolds (Anthony) Fort Worth, TX, and his two sisters, Catherine Ford Southgate, Mi and Lela Samuel Virginia Beach, VA. He's, also, survived by 17 grandchildren, 24 great grandchildren, 1 great grandchild on the way and a host of nieces, nephews, cousins, brother & sister-in-laws.

Fred Leon Bassett of Chicago, Illinois lost his battle with COVID-19 and passed away at Baylor Scott & White Medical Center in Grapevine, Texas on January 31, 2021. He was 87 years old, and just six days shy of his 88th birthday. In October... View Obituary & Service Information

The family of Fred Leon Bassett created this Life Tributes page to make it easy to share your memories.

Send flowers to the Bassett family.