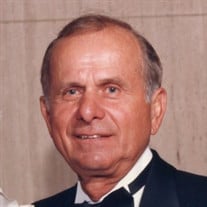 Frank Adam Luba, Jr., a loving husband and father of four, passed away on July 12, 2021, at the age of 92. His stories and jokes could light up a room, and we will forever remember his kind heart and sharp wit. Frank was born on September 4, 1928 in Amsterdam, New York to Frank Adam Luba, Sr. and Valentina Kosiba Luba. He studied chemistry at Siena College in New York, and then bravely served two years as a U.S. Army medic during the Korean War. Frank married the love of his life, Mary Ursula (Pat) Sheridan Luba, on January 23, 1954, and started a family the same year. Frank’s career began with IBM as a chemist in New York, and continued with a family move to Lexington, Kentucky when a company plant opened there. Ten years later, they relocated to Austin, where Frank served as a Procurement Manager until retiring in 1986, after more than 30 years with IBM. In retirement, he enjoyed life on their ranch, the Flying L Ranch in Elgin. Ranching was a labor of love for Frank, and you could usually find him working Beefmaster cattle or chasing around his grandchildren. Frank and Pat relocated to Euless in the DFW area in 2015. Frank was a man of faith, family, and friendship. He served his community as a well-respected member of the Polish Club, where he was instrumental in sponsorship of several Nigerian immigrants and Polish refugees; a member of the Elgin Lions’ Club, where he was awarded the Melvin Jones Fellow Award; and a longtime member of the St. Vincent de Paul Society. Professionally, Frank served as the IBM Employees’ Credit Union Chairman, a mediator for the Better Business Bureau, and a member of the National Association of Purchasing Management. Frank served as the St. Louis Catholic School Board President, a member of the Elgin Coffee Club, and actively participated in numerous church groups and activities. Further, three generations of Lubas enjoyed a waterfront lakehouse on Lake Travis that Frank built, maintained, and welcomed all with open arms. His selfless and giving spirit will never be forgotten. Frank was preceded in death by his parents, Frank and Valentina Luba; sister, Agnes Luba; brother, Arthur Luba: and granddaughter, Rebecca Tobolka. He is survived by his wife, Pat Luba; son, Tom Luba and his wife, Sherri; daughter, Anne Joyce; daughter, Patricia Tobolka and her husband, Tommy; daughter, Margaret Collins and her husband, Michael. Frank’s dear sister-in-law, Christine Luba, also survives him. His grandchildren include Stacey Bingham; Jaimi Curry and her husband, John; Jenny Gregorcyk and her husband, David; Mindy McCauley-May and her husband, Rob May; Christopher Joyce; Catherine Joyce and her husband, Nic Claeys; Brent Pitts and his wife, Maegan; Amy Pitts; Thomas Tobolka; Adam Collins; and Emily Collins. His great grandchildren include Jasmyn Bingham; Chance and Kayla Burrow; Caroline Curry; Reid and Charlotte Gregorcyk; Julia, Ansel, and Jasper May; Emory Koa Joyce-Claeys; Brackston, Brooks, and Braegan Pitts; and Aubrey Pitts. A funeral Mass will be officiated by Frank’s cousin Fr. Joseph Moyer, CSC, on July 29 at 2pm at St. Michael Catholic Church in Bedford, Texas with inurnment at DFW National Cemetery the following day. In lieu of flowers, donations may be made to the St. Vincent de Paul Society.

Frank Adam Luba, Jr., a loving husband and father of four, passed away on July 12, 2021, at the age of 92. His stories and jokes could light up a room, and we will forever remember his kind heart and sharp wit. Frank was born on September 4,... View Obituary & Service Information

Send flowers to the Luba family.