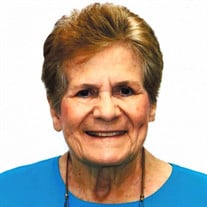 Frances Albritton Long (Janell), 84, went to be with the Lord, unexpectedly, on December 2, 2021. Janell was born on September 11, 1937, in Ft. Worth, TX, at Harris Hospital, to J.L. and Azilee Albritton. She graduated in 1955 from Amon Carter High School in Ft. Worth. She was involved in the Distributor Education program where she worked at Monnig’s Department Store, in the hosiery department. While working there she met the love of her life, Joe Bill Long. She and Joe Bill dated for 4 years and were married in her parent’s home in Ft. Worth on June 1, 1957. They were married 64 ½ years. She graduated from Arlington State College in May 1957 with an associate’s degree in Business. She was in Phi Kappa Theta Society and was voted Who’s Who in the school of Business Administration. After graduation she worked as a secretary for the district engineer at the Texas Highway Department. She was an office manager for many years for a Whataburger franchisee. She loved people and enjoyed all of her jobs, but the one she cherished and had the most impact, was being a MOM! She was an incredible example of a great wife. Later years she became the best NAY to 7 grandchildren, Dustin Sandoval, Morgan Sandoval, Bailee Sandoval, Robyn Collins, Ryan Beatty, Andrew Beatty, and Joey Beatty, who all adored her. She anticipated becoming a great grandmother, which happened August 2021 when Liam Shea Sandoval was born. Janell accepted Jesus as her Savior at the age of 5. She and Joe Bill were members of North Richland Hills Baptist Church. Janell was loved by many. She never met a stranger and was an example of God’s unconditional love. She will be missed by many other family members and friends. Janell was preceded in death by her parents, and her older brother, Harold. She is survived by her husband, Joe Bill, and a brother, John Albritton and sister Rebecca Ponder, daughter, Allison and husband, Don Sandoval of Denton; daughter Alisa and husband, John Beatty of Birmingham, AL.

Frances Albritton Long (Janell), 84, went to be with the Lord, unexpectedly, on December 2, 2021. Janell was born on September 11, 1937, in Ft. Worth, TX, at Harris Hospital, to J.L. and Azilee Albritton. She graduated in 1955 from Amon Carter... View Obituary & Service Information

The family of Frances A. Long created this Life Tributes page to make it easy to share your memories.

Send flowers to the Long family.