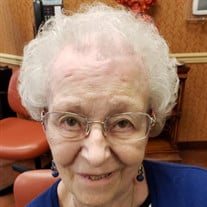 Frances Elizabeth Kirkpatrick Frances Elizabeth Johnson, daughter of Fred and Effie House Johnson, was born on February 22, 1920 at home on the farm RRI Jewell, Iowa. She graduated from Randall High School. She married Cloyd Cecil Kirkpatrick August 10, 1940 Cloyd and Frances along with their two children Linda and Lonna moved to California in 1952 Frances was a stay-at-home Mom until her girls graduated from high school. Her working career began at the May Company in Torrance, California and later at Crocker Bank where she worked as a loan supervisor. She retired from Crocker Bank so she and Cloyd could travel around the country in their travel trailer. They took many cruises and had loads of fun for many years. Cloyd passed in May of 1998. Frances lived in their condominium until 2010 when she moved to Peoria, Arizona to be closer to her daughter Linda. In May 2013 Frances and Linda moved to Texas. First Frances lived in Denton, Texas at Good Samaritan Independent living, in March 2019 Frances then moved to Legend of Fort Worth Memory Care. Frances lived there until her passing August 9, 2021. Frances is survived by her two daughters Linda Irwin-Hurley and Lonna Wilson. Her four grandchildren Amber (Chris) Jamieson, Brande (Bill) Seibert, Erin Harms and Sean (Darcy) Irwin and her nine great grandchildren Emma Jamieson, Christopher Seibert, Rylee Seibert, Haylee Irwin, Reagen Irwin, Molly Irwin, Davis Harms, Dylan Harms and Jacoby Harms. Frances is also survived by her two sister’s-in-law Lucille Johnson and Emma Belle Johnson and numerous nieces and nephews. Frances was an amazing mother and grandmother; she will be greatly missed by all. In Lieu of flowers, donations may be made to the Alzheimer's Association.

The family of Frances Elizabeth Kirkpatrick created this Life Tributes page to make it easy to share your memories.

Send flowers to the Kirkpatrick family.