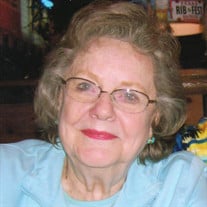 Faye Elaine Wellborn Robbins of North Richland Hills left this life on March 13, three and a half weeks before her 94th birthday. She was born April 7, 1928 in Jacksonville, Texas and moved with her family to Alto and Palacios before settling in Gladewater, where she graduated from high school as valedictorian in 1945. She received her bachelor’s degree in 1949 and her master’s in 1956, both from Baylor University, where she performed in numerous dramas, served as BSU secretary, and was secretary of the Honor Council. She spent her Baylor years as a member – and occasionally as a staff member – at Seventh and James Baptist Church, and she was committed to a variety of Christian work, including serving Waco’s inner city at the Ninth Street mission, leading Vacation Bible Schools across Texas with The Invincibles, playing a key role in the youth revival movement, and helping start the Baylor Religious Hour service and choir. She completed her classwork for a doctorate in European history from Vanderbilt University and later received her Ph.D. in American history from the University of Arkansas. While she held a number of jobs, she found her life’s calling in teaching – both as a professor of history and political science at several colleges and universities, and as a teacher of the Bible to Sunday School classes, seminars, conferences, and congregations across the South. A lifelong and devoted Baptist Christian, her final church membership was as a part of Trinity River Church in Fort Worth. During the last years of her life, she worshiped with Park Cities Baptist Church of Dallas via the internet. She was preceded in death by her husband of 59 years, Wayne Lindsey Robbins, Sr., her parents C.F. and Ethel Wellborn, her brother Charles Wellborn, her sister LaVerne Wentworth, her brothers-in-law Dick Wentworth and Jerry Robbins, and her sister-in-law Teresa Robbins. She is survived by her son Wayne Lindsey Robbins, Jr. and his wife Kara (Gamble) of North Richland Hills; her grandchildren Wayne Lindsey Robbins III (Micah) of Bedford, Carolyn Faye Robbins of College Park, Maryland, and Annessa Kaye Robbins of Waco; her brother-in-law, Steve Robbins (Judy) of Dickson, Tennessee; her sister-in-law JoAn Robbins Howerton of Lexington, Kentucky; many loving nieces and nephews; and a host of friends. A service of worship in her memory will be held on Saturday, March 19 at 2:00 at Lucas Funeral Home, 1601 S. Main/Hwy 377 in Keller.

Faye Elaine Wellborn Robbins of North Richland Hills left this life on March 13, three and a half weeks before her 94th birthday. She was born April 7, 1928 in Jacksonville, Texas and moved with her family to Alto and Palacios before settling... View Obituary & Service Information

The family of Faye Wellborn Robbins created this Life Tributes page to make it easy to share your memories.

Send flowers to the Robbins family.