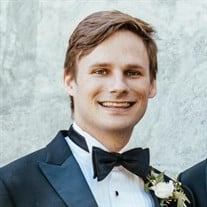 Born October 26, 1992, in Fremont, California, Evan Gerard White was the first-born son of John and Dana White, and older brother to Keith, Jenna, and sister-in-law Emily. Evan and family lived in California, Tennessee, Louisiana, Michigan, and Texas. On October 2, 2020, Evan got engaged to fiancée Katie Briggs. They take great pride in raising Lola, their Bernese Mountain Dog. Evan graduated from Keller High School in 2011 and from the University of Arkansas in 2015 with a bachelor’s degree in Finance. Evan worked in IT Audit at Protiviti for the last three years and was recently announced to be promoted to IT Audit Manager. He was equally admired by colleagues and clients for his technical capabilities as well as his always upbeat demeanor. In July of 2017, Evan was diagnosed with stage IV colon cancer. Evan faced his diagnosis courageously and did not let this disease prevent him from living his life. While going through treatment, he visited 5 countries in Europe, 11 states, and attended countless music festivals. He founded the Blues and Brews Bar Crawl to raise awareness and funds for colorectal cancer research. He served as an ambassador with Fight Colorectal Cancer and raised over $50,000 through his efforts. The way he fought with a smile on his face inspired many. He was the true definition of a warrior. On weekends, Evan could be found in front of the TV watching football. While he cheered the loudest for his Arkansas Razorbacks and Detroit Lions, that did not stop him from rooting for whatever teams he had placed bets on that week. In addition to watching sports, he managed several fantasy football leagues. This past year, he was able to combine his love of sports and philanthropy efforts to raise $10,000 for FightCRC with a March Madness bracket pool. Evan loved music—whether it was going to live shows with his friends, or more recently producing his own electronic music. Just two days after receiving radiation on his brain, Evan attended Austin City Limits with 30 friends and got to meet his biggest musical inspiration. It was the perfect send-off. Evan passed away on October 18, 2021, after a four-year-long battle with stage IV colon cancer. He was at peace knowing he would be returning home to his Lord and Savior Jesus Christ. He spent his final days surrounded by his family and friends. He will forever be remembered for lighting up every room he entered, his joyful spirit, rocking dad shoes, writing songs about his dog, quoting movies, his impersonations, and being the ultimate goofball. "Being a relentless champion of hope is all about being a beacon of light for others. No matter how deep the valleys or how dark the struggles, we will continue to inspire others, stay positive, and live our lives to the fullest. I'm involved with Fight CRC because colorectal cancer isn't just my fight and I hope my story and my experiences will give others hope." ~ Evan White In lieu of flowers, donations may be made to the link below in Evan's name: https://funraise.org/give/Fight-Colorectal-Cancer/0c0aa432-7377-4ddf-b6de-00500ac72633/

The family of Evan Gerard White created this Life Tributes page to make it easy to share your memories.

Send flowers to the White family.