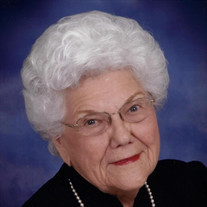 Estelle Frances Wenzel Manthei, of Waco, passed away on August 8, 2021 at her daughter’s home. Funeral services will be held Monday, August 16, 2021 at St. Paul Lutheran Church Waco at 11:00 AM with internment at Waco Memorial Park. Estelle Frances Rosentreter was born on her family’s farm in Hamilton, Texas, on March 15, 1928 to the late August and Agnes Rosentreter. She was baptized April 22, 1928 and confirmed March 29, 1942 at St. Paul Lutheran Church in Aleman, Texas, and she remained a devoted follower of Jesus Christ throughout her life. The daughter of first-generation German immigrants, Estelle attended a German language parochial school until eighth grade, which gave her a deep appreciation for her family’s heritage. On January 17, 1948, she married Monroe Amandus Wenzel, Sr., of Aleman, Texas, and together they raised three children. After her husband’s untimely passing in 1982, she married Charlie Gus Manthei on April 30, 1988, and they enjoyed 15 years together before he passed. Estelle’s upbringing on the farm inspired a tremendous work ethic and love of the outdoors. After retiring from her job as a pediatric dental assistant, energetic Estelle eventually found part-time work selling concessions at Baylor University. She used her “weenie money” to purchase special gifts for her loved ones and to fund trips to Alaska and beyond. In her spare time, she could almost always be found outside. She taught her grandchildren to fish and harvest vegetables on her husband, Charlie’s farm; meticulously cared for her yard at home; and proudly push-mowed her lawn into her late 80s. But Estelle’s greatest passion was other people. Cheerful and outgoing, Estelle made friends with ease. She enjoyed attending church functions, playing bunco and dominoes, and hosting loved ones at her home. No matter the event, Estelle could always be counted on to bring something delicious, whether a peach pie, tea cookies, or her famous chiffon cake. Her sweet cinnamon “grandma rice”—which she stirred for hours—was the essential ingredient to every family holiday. No one can make it like grandma could. Estelle was preceded in death by her husbands, parents, and three sisters, Paula Griffee, Ruby Bullard, and Odella Markwardt. Survivors include son Monroe Wenzel, Jr. and his wife Sheila of Corinth, Texas, daughter Carol Reinke and her husband Sam of Huntsville, Texas, and daughter Kathy Norman and her husband Clark of Southlake, Texas; grandchildren Karen Phelps and her husband Jack of Waxahachie, Texas, Mike Wenzel and his wife Jana of Bryan, Texas, John Reinke of Huntsville, Texas, Stacie Reinke of Huntsville, Texas, Meredith Fountain and her husband Nate of Huntsville, Texas, Sarah West and her husband Sean of Flower Mound, Texas, and Trey Norman of Chicago, Illinois; great-grandchildren Matthew Wenzel and his wife Bethany of Conroe, Texas, Avery and Emma Wenzel of Bryan, Texas, and Kylie and Ashlyn Wilson and Max Fountain of Huntsville, Texas; great-great grandchildren Adyson and Anniston Wenzel of Conroe, Texas; and several beloved nieces and nephews. In lieu of flowers, memorials can be made to the St. Paul Lutheran Church Benevolent Fund, 1301 Hogan Lane, Waco, Texas 76705.

Estelle Frances Wenzel Manthei, of Waco, passed away on August 8, 2021 at her daughter&#8217;s home. Funeral services will be held Monday, August 16, 2021 at St. Paul Lutheran Church Waco at 11:00 AM with internment at Waco Memorial Park. Estelle... View Obituary & Service Information

The family of Estelle Frances Wenzel Manthei created this Life Tributes page to make it easy to share your memories.

Estelle Frances Wenzel Manthei, of Waco, passed away on August...

Send flowers to the Manthei family.