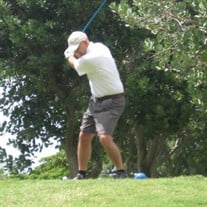 Eric Scott Fairfield, of Keller, Texas passed away on Sunday, May 8, 2022 in Keller. He was born September 19, 1961 in Oxford, Ohio to Herbert and Sarah (Gross) Fairfield. He made the family complete by joining his 11 month old brother Mark, whom he loved with all his heart and he called “Bubba”. Eric graduated from Bloomington High School North and received his Bachelors degree with honors in business from Miami University in Oxford, Ohio. He earned his Masters degree in Exercise Physiology from North Texas University, while also battling and defeating cancer for the second time. Eric will be remembered for his unique wit, his booming voice, his steel-trap memory, his eagle eye, his love of music and lyrics, movies and lines. He was an avid golfer and animal lover. He especially loved his rescue dogs, Daisy and Opie. Eric was a longtime member of The Hills Church where he served in the children's ministry for over 30 years. He had a strong work ethic and was passionate about his 23 year career at Cook Children’s Medical Center in Fort Worth, Texas. He touched the lives of thousands of Texas families with his expertise, humor, and compassion as a gifted and well-respected Pediatric Echocardiographer. Eric is survived by sons Jackson Ross of Holland, Michigan, and Eli Vance of Hutto, Texas; mother, Sally Fairfield of Bloomington, Indiana; brother Mark Fairfield on LaGrange, Kentucky; niece Zoe Fairfield of LaGrange, Kentucky; and the mother of his two sons, Julie Fairfield of Bloomington, Indiana. Eric was preceded in death by his father Herbert Fairfield, grandparents, James and Leah Fairfield and Ward and Mary Ellen Gross; and his niece Lily Fairfield. There are arrangements in Texas and Indiana. Texas visitation is Sunday, May 15th, 1:00 – 4:00 PM at Lucas Funeral Home, 1601 South Main Street, Keller, Texas, 76248. Texas service is Monday, May 16th at 12:00 noon at The Hills Church, 6300 NE Loop 820, North Richland Hills, Texas, 76180. Indiana service is Friday, May 20, 2022 at 10:00 AM at Sherwood Oaks Christian Church, 2700 E. Rogers Road, Bloomington, Indiana, 47401. Visitation will immediately follow the service until 1:00 PM. Memorial contributions may be made to Cook Children’s Medical Center of Fort Worth, Texas or ASPCA.

Eric Scott Fairfield, of Keller, Texas passed away on Sunday, May 8, 2022 in Keller. He was born September 19, 1961 in Oxford, Ohio to Herbert and Sarah (Gross) Fairfield. He made the family complete by joining his 11 month old brother Mark,... View Obituary & Service Information

The family of Eric Scott Fairfield created this Life Tributes page to make it easy to share your memories.

Eric Scott Fairfield, of Keller, Texas passed away on Sunday,...

Send flowers to the Fairfield family.