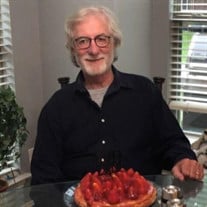 Eric Arnold Claycamp 1951-2021 Eric Arnold Claycamp of Grapevine, Texas passed quietly in his sleep on Tuesday, July 6, 2021. Eric was born on May 31, 1951 to Henry and Oakie Joanne [Hillman] Claycamp in WaKeeney, Kansas. With his parents’ moves, Eric lived on both coasts during pre-college years and even spent a year in college in Leysin, Switzerland. Eric ultimately landed in Texas, graduating from Texas A&M with a Bachelor of Environmental Design in 1974 and a Masters of Architecture in 1977. Shortly after graduation, he started his professional career in Dallas-Ft. Worth area where he worked for several architecture and engineering firms until he retired after 16 years at Hahnfeld Hoffer Stanford in Fort Worth. On August 20, 1976 Eric married Margaret Ann Rothrock. They raised three daughters and for the past nine years, enjoyed a succession of grandkids ranging from 1 to 9 years old. Eric enjoyed taking his daughters and their families boating, on beach vacations and sometimes, fishing. He looked forward to showing visiting relatives the latest among his varied and sometimes storied commercial building projects. As an American Institute of Architects board- and LEED (green building)-certified architect, Eric’s projects ranged from a major league stadium (outside of Texas) to renovating a top-tier art museum and even designing a whiskey distillery. Eric is survived by his wife, his three daughters Megan Ann (Eric) Huff, Chandra Joanne (Brandon) Rumbelow, and Sarah Josephine (Caleb) Drennan, six grandchildren, and his three siblings, Gregg Claycamp of McKinney, Jan Claycamp-Dickey of Sanger, and Jill Watring of Kenosha, WI. Following the service the family has invited everyone to join them at a Reception to Honor Eric Claycamp Hard Eight BBQ Coppell 688 Freeport Parkway Coppell, TX 75019

Eric Arnold Claycamp 1951-2021 Eric Arnold Claycamp of Grapevine, Texas passed quietly in his sleep on Tuesday, July 6, 2021. Eric was born on May 31, 1951 to Henry and Oakie Joanne [Hillman] Claycamp in WaKeeney, Kansas. With his parents&#8217;... View Obituary & Service Information

Send flowers to the Claycamp family.