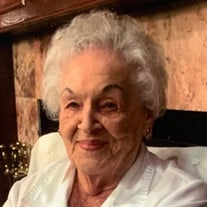 Elsie Ione Hally, 89, of North Richland Hills, Texas passed away after a brief illness on Friday, February 19, 2021. She was born Elsie Ione Kinzer on June 6, 1931 in Lewistown, Pennsylvania to Howard and Mary (Molly Decooman) Kinzer. She leaves behind her daughter, Celeste A. (Hally) Zapata of Fort Worth, Texas, her grandson, Steven A. Zapata of Seattle, Washington, daughter-in-law, Judith (Milkovich) Hally of Canton, Ohio, and many friends at St. Elizabeth Ann Seton Catholic Church and the Villas on Bear Creek. She was preceded in death by her son, David Lee Hally of Canton, Ohio in 1987 and her former husband, Robert Hally of Canal Fulton, Ohio in 2012. She worked at the Woolworth store in Lorain, Ohio where she met her husband. She worked at Apples Supermarket and was employed by JCPenney where she worked in inventory control at the warehouse in Canton, Ohio prior to her retirement after 25 years of service. She moved to Texas in 1999 to be near her daughter and grandson. Elsie loved to golf in her early years and was an avid sports fan, closely following the N.Y. Yankees, Notre Dame College football and the Pittsburgh Steelers. She volunteered for several years at the Football Hall of Fame induction breakfasts and luncheons where she met many of her football idols. She greatly enjoyed reading, dog sitting for her neighbors’ fur-babies, and actively followed the news and current events. She was known for her quick wit and dry sense of humor. She was never afraid to express her opinions. She was a friend who would always step up when needed and often volunteered at the Villas community store. Many from the Villas remembered her as the first friend they made who welcomed them to their new home. She will be greatly missed. The Mass of Christian Burial will be celebrated at St. Elizabeth Ann Seton Catholic Church, 2016 Willis Lane in Keller, Texas on March 8th, 2021 at 1:30pm. Inurnment will immediately follow at the columbarium on the church property. In lieu of flowers, donations may be made to the St. Elizabeth Ann Seton Catholic Church Building Fund. Lucas Funeral Homes is assisting the family with their arrangements.

The family of Elsie Ione Hally created this Life Tributes page to make it easy to share your memories.

Send flowers to the Hally family.