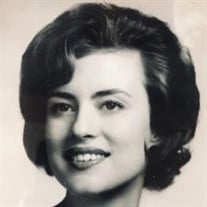 Elaine Walden Osburn March 12, 1943 - May 28, 2021 Elaine Osburn, age 78, died peacefully at home in Keller, TX after a short illness. Her loving husband of 56 years was by her side. Elaine was born in Lumber City, GA on March 12, 1943 to C.G and Catherine Walden. She spent her childhood on the family farm and attended Lumber City High School, graduating in 1961. Upon graduation, Elaine attended Georgia Southern College in Statesboro, Georgia where she earned a Bachelors degree in Home Economics and a Masters in Education. Georgia Southern is where she met the love of her life, Rick. Rick and Elaine were married on June 21, 1964 and started their life together. Their family grew by one when their daughter was born on March 22, 1970. The family resided in Statesboro, GA. where Elaine taught school. In 1977 the family moved to Kerrville, TX where Elaine hosted her own TV show on the local broadcast station. She also taught 6th Grade at Starkey Elementary School. Elaine made wonderful friends wherever she went and in 1982 the family returned to Statesboro, Georgia . Elaine jumped back into the classroom, then turned her talents to school administration and nutrition in both Statesboro and Claxton, Georgia. She and her husband were active members in community events and made many lasting friendships. Those enduring friendships followed her throughout her life and her eventual move to Coral Springs, Florida. While in Florida, Elaine turned her attention to becoming a realtor. She also worked in retail and became a secret shopper. A large part of her role in Florida was in support of her husband at the university and she was always a gracious hostess. Elaine then decided to return to education, becoming a school administrator with the Miami-Dade Public School system. After the birth of her granddaughter, Elaine and Rick moved to Texas to be close to family. Elaine became politically involved in the state, supporting women’s rights and advocating for social equality for all. She also had the remarkable job of being a grandmother - maybe her most favorite job of all. She wore many hats in her lifetime, but her most important hat was that of wife, mom and grandmother. She was the most loving, caring and supportive person to everyone who knew her. If you had the privilege of being in her circle, you were a friend for life. Elaine was intelligent, beautiful, loving, kind, patient, funny and endearing. She lived an amazing life full of laughter and love. She was fiercely loyal and loved unconditionally and we will all miss her very much. Elaine is survived by her loving husband, Rick Osburn, daughter Cathi Osburn Skinner (Loyd) and granddaughter Samantha Skinner, all of Keller, Texas. She is also survived by her sister Joy Kiser (Cleve), her brothers Michael Walden (Renee) and Sonny Walden (Sherry), sister-in- law Betty Osburn as well as her nieces Nikki Lay (Lloyd), Kara Jackson, Amy Haynes (Brian), Kate Purdy and Rebecca Walden (Jim) and several great nieces and nephews. Elaine was preceded in death by her parents, C.G. and Catherine Walden of Lumber City, Georgia A private Celebration of Life is being held by her family. In lieu of flowers, the family asks that you consider donating to one of Elaine’s most cherished charities, The Hill Country Youth Ranch. Elaine helped start this foundation in 1977 and was a lifetime supporter of this home for abused children. Donations in her memory can be made by visiting www.youth-ranch.org The family would also like to extend their sincerest gratitude to those who have expressed their sympathies. Elaine was the example of true friendship and this has been expressed to her family daily since her passing. We are very grateful for your loving support.

The family of Elaine Walden Osburn created this Life Tributes page to make it easy to share your memories.