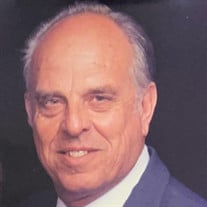 Edwin Earl Paris Sr. was called home to be with the Lord on January 3, 2022 at his home in Grapevine, Texas at the age of 89. He was a devoted and loving Husband, Father, Grandfather, Great-Grandfather, and friend whose life made a lasting impact on all who knew him. Born to Chris and Mary Paris in 1932 in Dallas, Edwin spent his childhood in Duncanville. After graduating from high school, he joined the Navy and served as an aircraft mechanic at multiple bases across the U.S. While he was in the Navy, he met the love of his life Francine Watts in October of 1952. They were married on February 14, 1953 and 10 months and 4 days later welcomed their first son Ed Jr. to the world. After leaving the Navy, Edwin and Francine welcomed their second son Larry in 1957. Edwin worked very hard after leaving the Navy and eventually joined the U.S. Postal Service where he worked for over thirty years before retiring. In his retirement, Edwin loved spending time with Francine and their sons, all their grandchildren and eventually great-grandchildren at their lake house. He loved the time they shared with their family and their church. His hard work continued in retirement, serving the Lord in his church and community, building and working on homes, working on anything mechanical, and generally tinkering with anything that he could find. Edwin is preceded in death by his siblings; Ewing, Jeanie, Lois, and LaNora and grandson Micah. Edwin is survived by Francine his wife of 69 years and their sons Ed Jr., his wife Sue and Larry, Ed Jr.’s children Chris, Nicole, Greyson, and Carson; Chris and his wife Nikki’s children Lydia, Aubree, and Lane; Larry’s children Alathia and Enoch; Alathia’s children MacKinsy, Violet, and Scarlett; and Enoch and his wife Leslie’s children Katelynn, Bailey, Judson, and Gracie. His love and commitment to his Lord and family will live on in all who knew him. He will be dearly missed, and his memory will be cherished. Visitation: Monday, January 10, 2022 at 12:00pm at Lucas Funeral Home- Grapevine Funeral Service to follow at 1:00pm. For those who can not attend please join us via live stream on the link above, Following the service, the family invites you to join them for a gathering at the home of Chris & Nikki Paris, 1309 Woodborough Lane Keller, Texas 76248

Edwin Earl Paris Sr. was called home to be with the Lord on January 3, 2022 at his home in Grapevine, Texas at the age of 89. He was a devoted and loving Husband, Father, Grandfather, Great-Grandfather, and friend whose life made a lasting... View Obituary & Service Information

Edwin Earl Paris Sr. was called home to be with the Lord on January...

Send flowers to the Paris family.