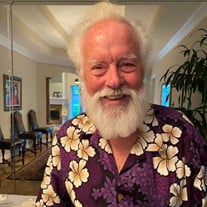 Earl Raymon “Ray” Waddell, III, 77, born 18 March 1943, a true friend and gentleman passed away Monday 1 February 2021 from complications of Covid. The oldest child of the Waddell family of Handley, Texas, Ray's life was highlighted from an early age as an honor student from grades 1-12. He received scholarships from UT Austin as an undergraduate student and as an honor graduate. Following his education, Ray entered service as an Air Force Officer in the 1960s. He achieved the rank of Captain before completing his service as an Intelligence Officer. Following his military service, Ray developed a computer consulting business and owned and operated a construction company in the 1970s in north Texas. After winding down those businesses, he then spent several years as a cowboy on his father-in-law’s ranch in Gonzales, TX. In the 1980s he enrolled in UT Austin school of law and obtained his law degree accompanied with full professorship at UT Austin school of law. Subsequently, Ray practiced law with the Tarrant County District Attorney before entering private practice. He was also an original board member during the creation of the Texas Wesleyan School of Law where he taught for many years. Ray inherited his passion for airplanes and aviation from his father, sharing it and passing it along to his son Luke. He cultivated a love for travel among his children and family friends. Ray is survived by his wife, Lisa Artman; his five children, Matt of Austin, Eve of Gonzales, Luke and wife Rebecca of Fort Worth, Evan of Austin, and Bailey of Frisco; his sister Jan of Arlington, his brother Loy and wife Virginia of Fort Worth; and five grandchildren, Nathan, Tyler, Micah, Ava, and Alexa. Funeral Service: 3 pm Sunday February 28, 2021 at Lucas Funeral Home of Hurst Visitation: 2 pm -3 pm, 1 hour prior to service Internment: DFW National Cemetery at a later date Due to Covid-19 we will be live streaming the services should you decide not to attend. Please click on the link provided for video stream https://video.ibm.com/channel/23847896/video/kcp750

Send flowers to the Waddell family.