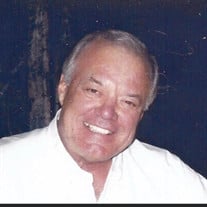 Douglas Wayne Vibrock September 18, 1940 – April 11, 2022 Originally from Garland, Texas, Douglas Wayne Vibrock, age 81 lived in Roanoke, Texas. Surrounded by his daughters, Doug was called home to his Lord and Savior on Monday, April 11, 2022. He was born in Houston, Texas on September 18, 1940 to Herman and Marjorie (Stith) Vibrock. Doug was a graduate of Garland High School, class of 1958. He played football and baseball and was considered an outstanding pitcher. Following high school, he attended the University of Texas in Austin. He enlisted in the Air Force and as an airman, he served our country in the Vietnam War. Serving honorably in the Vietnam War, Doug returned to the North Texas Metroplex area. He was employed by Vought Aeronautics in the Purchasing Department. He continued his love for airplanes and flight by establishing and serving as President of his successful business, Aeroelectronics. Doug was preceded in death by his parents; his daughter, Kimberly Dawn Horton; his brother-in-law, Gene Mayes; and nephews, Eric Shugart and Brock Shugart. He is survived by his sister, Sandra Mayes; Diana Vibrock, his former wife of 35 years; his daughters, Tracy Lynn Vibrock and Summer Vibrock Canfield; his grandchildren, Gage Vibrock, Mackenzie Horton, Devin Holloway, Jordan Holloway, and, Logan Holloway. Also, Choo Choo and Chance, Doug’s beautiful lab dogs survive their master. Doug was a humble man of God and he will be honored and remembered by his family and friends at an intimate gathering at a later date. Philippians 4:7 And the peace of God, which transcends all understanding, will guard your hearts and minds in Christ Jesus. In memory and to honor Doug, you may wish to donate to the Disabled American Veterans (DAV). National Headquarters: 860 Dolwick Drive, Erlanger, KY 41018 or P. O. Box 14301, Cincinnati, Ohio 45250-0301. More information can be found at DAV.org

The family of Douglas Wayne Vibrock created this Life Tributes page to make it easy to share your memories.

Send flowers to the Vibrock family.