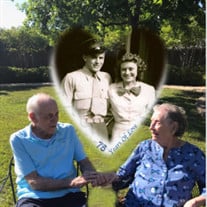 Dorothy Marie Tidwell Roach was born October 21, 1924 in Davidson County, Tennessee. She departed this life on May 2, 2021 in Bedford, Texas. Dorothy was the daughter of Elbridge and Annie Bradley Tidwell. Dorothy lived with her parents and eight siblings in western Tennessee for much of her early life. Her parents were sharecroppers raising cotton and soybeans. She worked in the fields along with the other family members while going to school. As the great depression was winding down, and as the nation moved to a war economy, work in the big cities was flourishing. Dorothy’s good friend Margaret Baucum and her husband Les came home to visit from Chicago over Christmas. Margaret told Dorothy that you could make 45 cents per hour working in Chicago and asked if she would like to come and stay with her and Les while getting settled in the big city. Dorothy quickly said yes and left the fields of west Tennessee for the opportunities that Chicago offered. Dorothy was raised in a family that placed great value in religious and spiritual matters, so of course one of the first things she did when getting established in her new environment was to find a church where she could continue her spiritual development. There was a Church of God nearby that Margaret and Les attended and Dorothy soon became a regular attendee there. One Sunday a handsome Marine named Gene Roach from southern Illinois asked Dorothy if he could walk her home. That was the start of a romance that lasted through 76 years of marriage. They will be celebrating their 77th anniversary together in heaven on Monday, May 17th. Dorothy and Gene lived in Chicago until 1987. After retiring they moved to Mount Pleasant Texas. Dorothy was a candy-striped volunteer at Titus County Memorial Hospital for many years and she and Gene were hospice volunteers for over 20 years. In 2011 they moved to Bedford Texas to be closer to their children who lived in the DFW area. In mid 2017, Dorothy and Gene moved into an assisted living facility in Bedford where they remained until their passing. Dorothy was preceded in death by her husband William (Gene) Roach, her parents, Elbridge and Annie Tidwell. Seven of her siblings are also deceased: Dennis Tidwell, Irene Fiala, Ethel Dixon, Elmer Tidwell, Floyd Tidwell, Ester Boyd, and Vance Tidwell. Dorothy is survived by her three children: Saundra (Lee Roy) Burns, Michael (Linda) Roach, Ruth (Dan Caliendo) Donahue; six grandchildren, thirteen great-grandchildren and eight great-great-grandchildren; and one brother, Ernest (Lynda) Tidwell. Dorothy’s remains will be interred at the Dallas Fort Worth National Cemetery, placed in the columbarium with Gene’s remains, at a time yet to be determined. “On Saturday, May 15, 2021 at 1:00 p.m. a Live Stream of Dorothy Roach's Celebration of Life will be viewable here https://video.ibm.com/channel/23847896/video/89lqsp

Dorothy Marie Tidwell Roach was born October 21, 1924 in Davidson County, Tennessee. She departed this life on May 2, 2021 in Bedford, Texas. Dorothy was the daughter of Elbridge and Annie Bradley Tidwell. Dorothy lived with her parents and... View Obituary & Service Information

Send flowers to the Roach family.